‘Do They Know It’s Christmas?’ will probably top the charts next month, with proceeds going to help fight Ebola. But what are the odds of Bob Geldof staging another Live Aid? 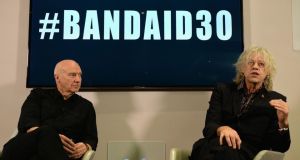 For the past 30 years we’ve been reminded every December that there’s no need to be afraid, that at Christmas time we let in light and we banish shade . . .

Do They Know It’s Christmas? is not just one of the bestselling songs of all time but also a cultural touchstone. Its verse, bridge and chorus are printed on the minds (and in the ears) of successive generations.

It all began with the late Paula Yates. Distressed by Michael Buerk’s BBC news report about the famine in Ethiopia in 1984, she left a note on her fridge saying that anyone who visited the house she shared with her husband, Bob Geldof, had to put £5 into a shoebox on the kitchen table.

Geldof, by then fading into oblivion with The Boomtown Rats, decided to round up all the pop stars he could think of and get them to record a charity single. Midge Ure, of Ultravox, wrote the music, Geldof wrote the lyrics and the song not only topped the charts at Christmas 1984 but led to the Live Aid concerts in Wembley and Philadelphia the following summer.

Yes, the musical arrangement was clunky and the lyrics either melodramatic or absurd, but if Duran Duran, Spandau Ballet and other slightly preposterous pop stars were what it took to raise millions in aid relief, that was an end in itself. Some £8 million was raised within a few weeks of the song’s release.

Now known as the “classic” version of the song, the 1984 original has been selling strongly every December for the past 30 years, with all profits going into the Band Aid Charitable Trust. A second, poppier version of the song, released in 1989 and featuring Kylie Minogue and Jason Donovan, isn’t really talked about any more.

The third iteration of the song – aka Band Aid 20 – released in 2004 and again featuring the big names of the day, failed to match the commercial success of the original and is now perhaps best remembered for its dreadful rap interlude. All the money raised from the 20th-anniversary update was directed to famine relief in Sudan.

Today, some of the world’s biggest music acts, including Adele, One Direction, Ed Sheeran, Bono and Chris Martin, will gather in a London recording studio for a new version of the song.

Bob Geldof says he was motivated to round up the troops one more time after getting a call from the United Nations saying that the Ebola virus was “getting out of control” in west African nations, with more than 5,000 people already dead.

Midge Ure’s music will remain largely untouched, but Geldof says the lyrics need an overhaul, as the words are now “out of touch and inappropriate”. He points to the fact that parts of Africa are booming, “with the fastest-growing middle class in the world”.

“It’s a tragedy that modernity has released this beast into the world,” says Geldof. “It renders humans untouchable, and that’s sickening. The international response so far has been scandalous.”

The singer labelled the United Arab Emirates, one of the world’s richest countries, a disgrace for giving just £5 million (€6.3 million) to Ebola charities, and claimed that China had delivered “f*** all”.

David Bowie will introduce the new Band Aid 30 single, which will sell for about €1.25 a download and €5 a physical copy. Although the download will be on sale on Monday morning, Geldof is urging people to wait to buy the physical single when it hits the shops here, in three weeks. Band Aid 30 will be number one in Ireland and the UK at Christmas, according to bookmakers.

Although Geldof has ruled out a reprise of the Live Aid concerts next summer, he had also, until this week, ruled out a new Band Aid single.

Sex and the Irish: We were always a law unto ourselves
8

Experience O’Connell Bridge: A Focal point for revolution and change
9