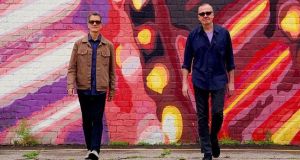 Brilliant Corners
Black Box and various venues, Belfast, finishes today
The Brilliant Corners festival, whose fresh sounds have been resounding around Belfast’s Cathedral Quarter for the past 10 days, finishes today. Still to come at the Black Box is a lunchtime performance from a powerful quartet led by Derry guitarist Joseph Leighton featuring Partisans saxophonist Julian Siegel, Dinosaur bassist Conor Chaplin and Belfast drum dynamo David Lyttle (see Monday), plus an evening show from rising London saxophonist Binker Golding and his band. The film programme concludes at 6pm at the Beanbag Cinema with Mama Africa, a documentary about the great South African singer Miriam Makeba, and there’s a free jam session at the Sunflower pub at 10.30pm.

Kenosha Kid
Black Gate, Galway; Sunday 8th, Levi’s Bar, Ballydehob
US guitarist Dan Nettles has an unusual modus operandi. The genial guitarist, based in the indie-rock asylum of Athens, Georgia, travels the world, reinventing his band, Kenosha Kid, wherever he lands, hooking up with like-minded musicians and teaching them his music – a beyond-genre gumbo of surf rock, country rock, funk and college radio. His connections with Ireland go back several years, and Nettles concludes an Irish tour this week with the latest iteration of Kenosha Kid, featuring Berlin bassist Roland Fidezius, and two of the Dublin scene’s most fearless adventurists, OKO guitarist Shane Latimer and Redivider drummer Matthew Jacobson.

Linley Hamilton Quintet
Arthur’s, Dublin
Belfast trumpeter Linley Hamilton realised a long-held ambition last year when he toured and recorded with his dream band, featuring two legendary US musicians, drummer Adam Nussbaum and bassist Mark Egan, alongside regular collaborators saxophonist Derek O’Connor and pianist Cian Boylan. The reassembled quintet finish a short Irish tour, launching the album For the Record, in Arthur’s tonight. The leader is an accomplished post-bop trumpeter with a burnished tone and a keen sense of drama, and with the mercurial O’Connor – best known as the resident horn in the Late Late Show band - also in the mix, and a solid-gold rhythm section driven by one of the most respected American drummers of the past 50 years, this is a top drawer quintet with a polished set of Hamilton originals and perhaps a few surprises up their sleeves.

Dublin Jazz Co-Op: Akkord Kollectiv
Workman’s Club, Dublin
Drummer and composer Ethan Edwards, programmer of the Dublin Jazz Co-Op series, continues to interrogate genre definitions this week with Akkord Kollectiv, a duo of classically trained musicians – percussionist Tadhg Kinsella and cellist Gabriele Dikciute – blending acoustic performance and electronic processing. For this performance, in the intimate Vintage Room overlooking the Liffey, the duo will improvise a soundtrack to a film by Lithuanian poet and film-maker Jones Mekas. Jazz purists may hide in their bunker but those curious about the multiple trajectories of contemporary creative music will learn more by showing up to the Workman’s every week and opening their ears.

Jim Beard & Jon Herington
Monday 9th, Maggie’s Farm, Co Down; Tuesday 10th, Magee Campus, Derry; Wednesday 11th, Whelan’s, Dublin; Thursday 12th, Dolans, Limerick; Friday 13th, Island Arts Centre, Lisburn; Saturday 14th, Flowerfield Arts Centre, Portstewart; Sunday 15th, Hawk’s Well, Sligo, jonherington.com/beardherington.html
Between them, pianist Jim Beard and guitarist Jon Herington have more than 30 years on the road with Steely Dan under their belts. As any musician will tell you, that’s about the hardest gig to get in rock’n’roll and an honour only accorded to the very best. Beard and Herington have been playing together since the late 1980s, but it’s usually helping other musicians to realise their own visions. Here’s a rare chance in an intimate setting to hear what these two master musicians get up to when left to their own devices, away from the stadium stages they usually frequent, just two old friends and the music they have been accumulating over half a century. The few tickets still available are likely to sell out fast, so Dan fans should not delay.

David Lyttle Trio
Town Square, Belfast
Belfast drummer, producer and jazz instigator David Lyttle begins a new residency this week at the Town Square bar on Belfast’s Botanic Avenue. The Monday Club, subtitled “the new home for real jazz”, features Lyttle’s trio with rising Donegal brothers Michael and Conor Murray on bass and saxophone. It’s a gnarly post-bop saxophone trio driven by the leader’s grooves, but given Lyttle’s energy and starry musical connections, the Monday Club promises to be the sort of weekly gig where you never know who might turn up.

Joel Harrison Quartet
Crane Lane, Cork
American guitarist Joel Harrison delights in crossing boundaries and confounding expectations. The inventive composer and thoughtful band leader’s previous projects have cheerfully embraced country and folk, Indian and African, classical and popular music, always rooted in the improvisatory freedom of jazz. Harrison touches down in Cork this week with a stellar quartet of fellow adventurists, including saxophonist and composer David Binney, bassist and Whirlwind label boss Michael Janisch and heavyweight New York drummer Gerald Cleaver. Opportunities to see working US bands of this quality are rare in Ireland, and that such a talented group may be experienced in the febrile atmosphere of Crane Lane Theatre, in the weekly series curated by Cork trombonist Paul Dunlea, for the princely sum of nothing at all, is frankly miraculous.

Plaza Real
Arthur’s, Dublin
Bassist Barry Donohue’s paean to 1970s fusion pioneers Weather Report is about as close as you’ll get to the funky vibe of Zawinul, Shorter, Pastorius et al without inventing time travel. Alongside Donohue’s supple bass grooves, the group features vintage keyboard guru Darragh O’Kelly, who has a finely honed affinity with Joe Zawinul’s keyboard sounds and the synthesiser pioneer’s oblique approach to soloing. Add fiery Cape Town saxophonist Chris Engel, funky drummer Shane O’Donovan and virtuoso percussionist Éamonn Cagney and you have one of the gutsiest homages to the golden age of jazz-rock fusion you’re likely to hear in the 21st century.

RBG Trio feat Scott Flanigan
Arthur’s, Dublin
US saxophonist Meilana Gillard’s decision to base herself in Northern Ireland in recent years has brought a distinctive new jazz voice to this island in more ways than one. Female saxophonists are still lamentably rare in jazz, particularly in Ireland, let alone saxophonists with the sort of fluidity and sense of adventure to lead a “no chords” saxophone trio with a top Dublin rhythm team like bassist Dave Redmond and drummer Kevin Brady. Throw classy Belfast pianist Scott Flanagan into the mix and you have a cross-Border body with real muscle, taking the classic saxophone tradition of Coltrane, Rollins and Henderson into more contemporary spaces.