"Songs about love, sex, vacations, drugs and all of the other fun things in life"

She’s been a child star and an indie-band darling, but the solo approach is a much better fit for a slightly older, wiser Jenny Lewis 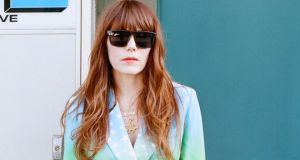 Jenny Lewis is talking to The Ticket all the way from Charleston, South Carolina, so we can’t see if she’s wearing the dapper multi-coloured, specially designed/painted pantsuit you see in the picture. Not to worry – she is in a colourful mood, having just released her third solo album, The Voyager, a record of varied hues, tones and shades.

Lewis is a sharp customer and the album is full of smart Laurel Canyon-influenced indie-pop songs that have lyrical depth, experience and observation.

Having come through some tough times in the past few years (the death of her father, the dissolution of her much-loved indie band Rilo Kiley, recurring bouts of insomnia), she seems keen to get it out there that The Voyager marks a change.

She likes, for example, the irony that, as a solo artist, she has now made almost as many albums as the revered Rilo Kiley made. “I find that funny,” she says, “because I never set out to be a solo artist. It just happened to me, so I suppose I’m really just finding my ground, and getting, yes, I think so, more comfortable with it. We’ll see, of course. It’s pretty exciting, needless to say, because without a band set-up you can do anything you want; work with whomever you want, and go wherever you want to make the records. The future seems limitless with possibilities, let’s put it that way.”

The Voyager follows Rabbit Fur Coat (with the Watson Twins) in 2006 and her second solo album, Acid Tongue (2008). Other work includes the 2010 Jenny & Johnny album I’m Having Fun Now (with her partner, Jonathan Rice, who co-produced The Voyager, along with Ryan Adams and Beck); a recent tour with another set of US indie-darlings, The Postal Service; and the song Completely Not Me, co-written with Vampire Weekend’s Rostam Batmangli for Lena Dunham’s HBO comedy Girls.

In those Rilo Kiley days, did she find the band format restrictive? “Not necessarily,” she replies. “And I don’t think it’s something to equate with a negative. It’s a democratic process, obviously, and something beautiful can come out of that. It’s more like there are parameters within which creativity can be explored. I suppose with being a solo artist – or solo anything, for that matter – those parameters are essentially lifted, or not even there.

“But then the creativity – as well as your behaviour, willingness to work, your tastes – rests on your shoulders alone. And when the work finally comes out, ditto the critique and praise. It’s really just engaging with a different set of responsibilities, and different creative outcomes.”

Love, sex, drugs Responsibilities. Outcomes. A different age, too. Now in her late 30s, Lewis seems acutely aware that time is passing, perhaps more quickly than she would like. Her latest single, Just One of the Guys (which features her Hollywood chums Anne Hathaway, Brie Larson and Kristen Stewart, dressed, not too convincingly, as moustachioed blokes) references her biological clock tick-tick-ticking away. But she is quick to point out that The Voyager isn’t limited to songs about alarm settings on biological clocks.

“There are songs about love, sex, vacations, drugs and all of the other fun things in life on the album, too,” she points out. “The biological clock is just sort of a distant sound in the background.

“If the record were only about my biological clock ticking away then I don’t think anyone would listen to it, let alone buy it. That said, this and the other themes are part, I feel, of being a female writer in her 30s.”

Lewis has been in showbusiness a long time. Born in Las Vegas, Nevada, the daughter of showbiz troupers (mom and dad had their own lounge cabaret act), she spent most of the 1980s and 1990s appearing in US television shows such as Life with Lucy (veteran US comic Lucille Ball’s final TV outing), The Golden Girls and Perry Mason, and had minor parts in movies such as Troop Beverly Hills (1989) and Pleasantville (1998). Did she ever, as a teenager familiar with the spotlight, think about what it would be like to be a woman in her 30s?

Her answer is short and sharp(ish), in a perish-the-thought kind of way. “No, to be quite honest. I’ve never worried about the future in that way. And I’ve written things from when I was a child. I’ve always tried to find some relevance from my life at the time of living it and to write about it. And, as I’m sure you know, many songwriters, some of whom are my favourites, only come into their own from their 30s and 40s and beyond. For example, my favourite Bob Dylan album is Time Out of Mind (1997), which at the age of 56 came pretty late in the game for him. If you’re on board for the journey of a writer, then you’ll be with them from the start to the end. Hopefully, anyway.”

Has she learned over the past 15 years or so that people are willing to take a similar journey with her as a songwriter?

“I think so,” she says. “I truly hope so. I think youth culture permeates most things, and it has happened that when I turn on the radio and listen to a song I can’t really identify with what I’m hearing. But ultimately I hope that songs with stories continue to interest people, particularly if they want to dig deeper, to look for subtext.”

Feminism via Compton Despite their colourful and occasionally bubbly West Coast sound, Lewis’s songs have a core of feminism – a combination that she explains comes from highly contrasting influences.

“I admired many female songwriters that my mother played in our house – the likes of Laura Nyro, Roberta Flack, many more. But then – typical ranty teenager – I started listening to hip-hop, so my role models were, for the most part, male rappers. How does a teenage girl come into herself while listening to Compton’s most wanted? Can you imagine? It’s not exactly the most female-centric or empowering music.”

Indeed, but Lewis had the good fortune during her acting years, she relates, to be surrounded by “amazing women who set a really strong example for me”. Another major influence was the New York-based Native Tongues hip-hop collective, which included the likes of Jungle Brothers, De La Soul and A Tribe Called Quest.

“And women in hip-hop, too – they were crucial. Ladies such as Queen Latifah and Monie Love. That was the kind of hip-hop that truly spoke to me. I dipped my toes into the gangsta-rap pool, and through that I felt and understood what misogyny was. As you can guess, that never appealed.”

The Voyager is out now