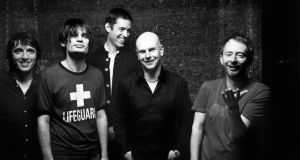 Radiohead tickets sold out in minutes this morning, leaving many fans disappointed.

This is Radiohead’s first show in Ireland since their 2008 concert at Malahide Castle.

Hardcore fans may have to travel to see the band. There are still some concerts in their European tour that have yet to go on sale. Tickets for the Best Kept Secret Festival in the Netherlands go on sale on November 19th, and France show goes on sale on November 8th. At the time of writing, shows in the UK had sold out, but there were tickets available for the band’s concert in Florence, Italy.

Sophisticated bots being used by ticket touts are thought to be partly responsible for the concert selling out in minutes. The band have insisted that anyone with tickets will have to show photo ID at the 3Arena date, with a limit of four tickets per person.