Neil Young and Crazy Horse trot off with a whimper 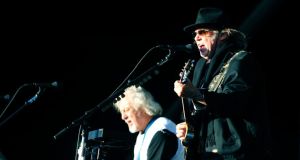 What was that wafting through the air at the RDS Arena last night? It was the smell of disappointment, as 18,000 Neil Young fans came to the slow and painful realisation that the man in black on stage was there only to please himself and not the modest attendance at the 30,000 capacity venue.

Neil Young can be stubbornly self-indulgent at the best of times, yet fans still held out hope that he might dust off a few of his best-known tunes on this tour, with his long-standing band, Crazy Horse.

But instead of Heart of Gold, The Needle & the Damage Done and Rockin’ in the Free World, the crowd got 20-minute-long guitar jams and only a handful of songs that you could consider classics.

The outdoor show began with Dublin band Little Green Cars, followed by Tex-Mex troupe Los Lobos, and then The Waterboys, led by Mike Scott. The scene was set for good summer vibes - and the rain held off for most of the set. Young and his Crazy Horse bandmates - guitarist Frank Sampredo, bassist Billy Talbot and drummer Ralph Molina - huddled together at the centre of the stage and kicked off with Love and Only Love, from the album Ragged Glory, then followed with Powderfinger, from Rust Never Sleeps.

A promising start - could we be in for a raggedly glorious night?

The quartet continued with the title track from Young’s current album, Psychedelic Pill, but the epic Walk Like a Giant, from the same album, proved a little too long for some of the punters, who were probably hoping he’d get around to playing some hits before they hit retirement age. When the band followed that with an extended bout of amp-feedback noise, you could see a number people in the stands gesticulating their disapproval as blood pressure levels went up to eleven.

When Young strapped on the acoustic guitar and fitted his harmonica stand around his neck, the cheers rippled through the arena. Now maybe we’ll get down to some classic folk-rock business. He played a classic, all right - Bob Dylan’s Blowing in the Wind. At this stage in the set, reminding the audience of another ornery cuss who seldom lives up to his fans’ expectations was not a good move.

Soon it was back to the long jam-outs on Ramada Inn, from the new album, and the very pedestrian Fuckin’ Up. In fairness, Young is a cracking lead guitarist, and he has a telepathic rapport with his Crazy Horse bandmates. You won’t hear better jamming this side of a Grateful Dead tour. But at this stage everybody was feeling the guitar solo fatigue, and by the time Young tossed the crowd a sweet treat in the form of Cinnamon Girl, it was too late. The chance to bond with one of rock’s towering heroes was lost.

He closed with Hey Hey, My My (Into the Black), and its refrain of “Rock’n’roll will never die” rang a little hollow through the drizzle. Rock’n’roll may never die, but last night it certainly had a long, loud snooze.