Five years on, a musical virtuoso returns to Ireland 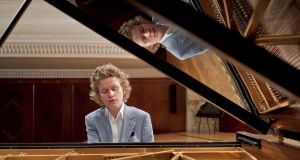 Nikolay Khozyainov: his playing was free of grandstanding, though the glitter of the rapid-fire finale was as bright as you could have wished.

Russian pianist Nikolay Khozyainov was 19 when he took first prize in the Dublin International Piano Competition in May 2012. He was born in Blagoveshchensk, a city on the northeastern Sino-Russian border, a 7,787km, 102-hour drive from Moscow.

He began to play piano at the age of five and started his studies at the Moscow Conservatory in 1999. His competition successes in Dublin and elsewhere have not kept him from his studies, and at the moment he is pursuing an advanced degree under Arie Vardi at Hannover’s Hochschule für Musik.

He was a popular winner at the Dublin competition in 2012, when he presented himself as a commanding virtuoso, although one who was sometimes unable or unwilling to rein himself in.

However, the arc of his performances in the competition was perfectly judged, and he reached his peak in finals in an authoritatively controlled performance of Rachmaninov’s Third Piano Concerto.

He repeated the work on his second return to the RTÉ National Symphony Orchestra since his competition success and, as in 2012, he showed himself totally unfazed by the work’s exceptional demands.

From his beautifully gentle approach to the concertos quiet start, it was clear that his was going to be a finely balanced approach.

His playing was free of grandstanding, though the larger and more daunting of the first-movement cadenzas was anything but underplayed and the glitter of the rapid-fire finale was as bright as you could have wished.

Swedish conductor Daniel Blendulf and the orchestral players were with him all the way in this finely integrated performance. And Khozyainov remained on top form for his encore, a no-holds-barred performance of a truncated version of Busoni’s Kammer-Fantasie über Bizets Carmen, a 20th-century take on the pianistically elaborate opera fantasies that were so popular in the 19th century.

Blendulf presented César Franck’s Symphony in D minor, the evening’s one work that was genuinely from the 19th century, as a piece with real fire in its belly, sharp in outline, and fiercely projected in its climaxes.

The concert opened with a boomtime legacy, Donnacha Dennehy’s 2009 Crane. The music was begun as a ballet for real-life cranes on the Dublin skyline, the cranes’ movements to be choreographed by Shobana Jeyasingh. Many of what the composer calls the piece’s “monolithic gestures” are “bound up with my poetic thinking about cranes (I was obsessed for about a year)”. Blendulf was as attentive to the music’s punchiness as to its ethereal shimmering.

Earlier in the week, the NSO gave the second of this year’s Music in Our Time concerts, shamefully, like the last concert in the series, presented without any printed programme, although with a slightly more informative introduction from the stage by Ellen Cranitch.

The concert included the premiere of a new work by Offaly composer Ann Cleare, Eyam V (Woven), for two instruments that rarely see the light of day alone, let alone together in front of an orchestra, contrabass clarinet (Carol McGonnell) and contrabass flute (Richard Craig). This flute is so large and long that it is played vertically, with the mouthpiece pointed at a right angle for the player, the whole kept off the ground on a spike.

Cleare has been working on a series of pieces with Eyam in the title and involving clarinet, contrabass clarinet, bass flute and contrabass flute. As she declared at last week’s concert, “I really love low sounds”, and not just for their sonic lowness but also for their complexity and the richness of their upper spectrums.

On one level the work reminded me of the atomic theory in Flann O’Brien’s The Third Policeman, in which an unfortunate man has spent so much time cycling here and there that the exchange of atoms between himself and his bike had left him “halfway to being a bicycle himself”.

Eyam V blurs the lines between the two solo instruments and the orchestra in a similar way, though the general trajectory of the music, from the lowest depths to the highest reaches, ending with a flavour of the start, is at all times clear. And hearing such rare instruments in such expert hands was a pleasure in itself.

The starting points for British composer Julian Anderson’s The Discovery of Heaven, premiered in 2012 by the London Philharmonic Orchestra, are the eponymous novel by Dutch writer Harry Mulisch and the imperial gagaku music of Japan.

The music is neither programmatic nor blatantly imitative of the sound of gagaku. But it is sensual, sophisticated and polyglot. As in Cleare’s new work, conductor Gavin Maloney conveyed it with a distanced precision.

It was clearly calculated as a programme that couldn’t fail – two concerti grosso by Handel, a concerto by Vivaldi, and a harpsichord suite and trio sonata by Purcell – and it didn’t. Duff, the orchestra’s leader, showed herself a less extreme interpreter than the orchestra’s artistic director, Monica Huggett, with tempos more moderate than Huggett’s and shaping that was less spiky. As an hour of indulgence, this concert offered just what it promised.