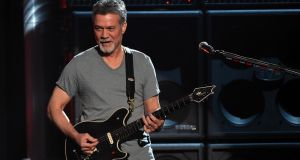 Revered rock guitarist Eddie Van Halen has died at the age of 65 following a battle with cancer, his son has said. Van Halen was part of the classic Van Halen line-up alongside his brother Alex, Michael Anthony on bass and David Lee Roth singing.

The band was hugely successful and has sold more than 80 million records worldwide.

In a statement shared on Twitter, Van Halen’s son, Wolfgang, said his father died on Tuesday.

He said: “I can’t believe I’m having to write this, but my father, Edward Lodewijk Van Halen, has lost his long and arduous battle with cancer this morning.

“He was the best father I could ever ask for. Every moment I’ve shared with him on and off stage was a gift.

“My heart is broken and I don’t think I’ll ever fully recover from this loss.”

Wolfgang, who became Van Halen’s bassist, added: “I love you so much, Pop.”

Van Halen, who fought alcoholism, had battled health issues. He first received treatment for tongue cancer in 2000 and the subsequent surgery removed about a third of his tongue.

He was declared cancer-free in 2002. It was reported last year that Van Halen had been privately battling throat cancer for five years.

Tributes were paid to the guitarist following news of his death.

Tommy Thayer, lead guitarist for Kiss, said he is “so sad to hear this”.

Geezer Butler, founder member of Black Sabbath, said: “Just when I thought 2020 couldn’t get any worse, I hear Eddie Van Halen has passed. So shocking- One of the nicest, down to Earth men I have ever met and toured with. A true gent and true genius. RIP. So sad. Thoughts go out to his brother Alex, and his family.”

Van Halen was married twice. His first wife was the actress actress Valerie Bertinelli. She is Wolfgang’s mother. They divorced in 2007. Van Halen married Janie Liszewski in 2009. TMZ reported she was by his side when he died at a hospital in Santa Monica.

Van Halen was born in Amsterdam in 1955 and studied classical piano after moving with his family to the Los Angeles suburb of Pasadena in the early 1960s.

After switching to guitar, he and his older brother Alex, who had taken up the drums, formed the early bands that would eventually become Van Halen in the 1970s, with lead singer David Lee Roth and bass player Michael Anthony.

The hard rock band, featuring Eddie Van Halen’s explosive guitar solos, quickly became a staple of the famed Sunset Strip music scene in Los Angeles before releasing their eponymous debut album in 1978, which became one of the most successful debuts of the decade, selling more than 10 million copies in the US alone.

It was the first in a string of top-selling albums that would make Van Halen one of the biggest rock acts of the late 1970s and early 1980s. They followed their debut with Van Halen II, Women And Children First, Fair Warning and Diver Down and by the mid-1980s were one of the most popular acts on the planet with hits like Ain’t Talkin’ ‘Bout Love, Jump, Panama and Hot for Teacher.

Roth left the band in 1984 and was replaced by Sammy Hagar for a decade.

Van Halen’s pioneering, virtuoso technique earned him a place along the likes of Jimi Hendrix, Eric Clapton and Jimmy Page of Led Zeppelin as one of rock’s top guitarists. In 2012 a Guitar World magazine poll of readers voted him the greatest guitar player of all time.

In 2015, Rolling Stone magazine ranked Van Halen eighth on its list of the 100 greatest guitar players of all time. Pearl Jam’s Mike McCready penned a tribute at the time, and said: “A lot of it is in his hands: the way he holds his pick between his thumb and middle finger, which opens things up for his finger-tapping. (When I found out he played that way, I tried it myself, but it was too weird.)

“But underneath that, Eddie has soul. It’s like Hendrix – you can play the things he’s written, but there’s an X factor that you can’t get.”

The band was inducted into the Rock And Roll Hall Of Fame in 2007. – PA, Reuters