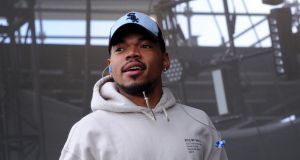 Chance The Rapper performs in Chicago, Illinois, the US. The rapper has cancelled his Longitude appearance. File photograph: Timothy Hiatt/Getty Images for Nickelodeon

Chance the Rapper has cancelled his appearance at Dublin’s Longitude festival.

The US rapper had been due to headline the festival on its second night, Saturday, July 6th.

🚨𝗟𝗢𝗡𝗚𝗜𝗧𝗨𝗗𝗘 𝗔𝗡𝗡𝗢𝗨𝗡𝗖𝗘𝗠𝗘𝗡𝗧
⌁⌁⌁⌁⌁⌁⌁⌁⌁⌁⌁⌁⌁⌁⌁⌁⌁⌁⌁⌁⌁⌁⌁⌁⌁⌁⌁
Unfortunately Chance The Rapper is no longer able to perform at #Longitude2019. We are delighted to announce that @Stormzy will headline the Saturday Night!!! pic.twitter.com/apMLLzLFGZ

However, in a tweet on Friday the festival announced that the rapper had been forced to pull out of the slot. The post went on to reveal that British grime artist Stormzy would be the replacement headliner for Saturday.

Longitude is due to take place in Dublin’s Marlay Park over three nights from July 5th-7th. A$AP Rocky will headline the first night, while Cardi B and Future share top billing on the Sunday.

On Friday, a limited number of weekend tickets were released for the festival, which is otherwise sold out.