The pianist, just 22, delivers an unconventional programme with awe-inspiring confidence 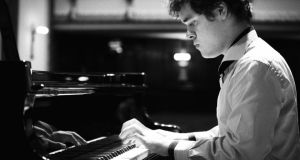 Benjamin Grosvenor: redrew balances at will and shifted material into different octaves as he saw fit, not to emulate effects that are possible on a harpsichord but rather to make absolutely the best pianistic effect

A recital by the 22-year-old English pianist Benjamin Grosvenor is anything but an everyday experience. Just look at the programme he offered at the National Concert Hall on Sunday.

In fact, just look at the first half alone: a gavotte and six variations by Rameau, a composer whose harpsichord music has long fallen out of favour with pianists; Busoni’s elaborate, romantic war-horse style arrangement of Bach’s Chaconne in D minor for solo violin; and Franck’s Prélude, Choral et Fugue, a high point of late 19th-century keyboard romanticism, and a work with a sound-world that is all its own.

Grosvenor is fleet-fingered, and has a light enough touch to embrace quite a degree of embellishment in Rameau without making the melodic lines become overweighted. And if that seems like a suggestion that he inclined towards stylistic purity, don’t believe it for a moment. He redrew balances at will, and shifted material into different octaves as he saw fit, not as if trying to emulate effects that are possible on a harpsichord, but rather to make absolutely the best pianistic effect.

The Bach/Busoni Chaconne is an exercise in filling in. Busoni wasn’t the first composer to arrange it for piano. Brahms made an extraordinarily effective arrangement, shifting the music down an octave, and using only the left hand, which helped to retain the tension created by the technical challenges of the original without having to stray from what Bach wrote.

Busoni took the opposite approach. It’s as if he felt he were dealing with an unfinished work that needed a whole new background added as well as some reinforcement of what was already there.

Grosvenor’s performance was a tour de force, tight and clear so that the framework of the original always stood out clearly, no matter how heavy an overlay Busoni had created for it.

That same ability to focus on the essential, to keep the important lines in sharp relief, paid rich dividends in the Franck, where the playing was at once noble, touching and exciting.

Grosvenor seemed a little more capricious in his selection of Chopin (the Barcarolle, two mazurkas, and the Third Ballade) and returned to the high form of the first half in three Goya-inspired pieces by Granados, the melting swoons of The Maiden and the Nightingale being particularly impressive.

January 20th was a day of new and old at the NCH. The lunchtime Horizons series, with Gavin Maloney conducting the RTÉ National Symphony Orchestra, was all about the new. London-based Irish composer David Coonan curated the programme, juxtaposing the Yeats-inspired Byzantium by Joseph Davies with his own Träumerei (a violin concerto with Kristine Balanas as soloist) and the first performance of his Sarcasms.

The titles of Coonan’s pieces include hints of their starting points: the world of Brahms in the case of Träumerei; and Prokofiev and Shostakovich in the case of Sarcasms. What is most striking, however, is the connection Coonan and Davies clearly feel with the orchestra as a medium of expression – and also their confidence in handling it.

The insistent lyricism of the concerto was altogether clearer than the declared concern of Sarcasms with what Coonan calls “a peculiar type of double-expressiveness”, which he associates with Prokofiev and Shostakovich. I picked up the connection with the direct world of Prokofiev, but the possible ambiguities eluded me.

That evening, the NCH was taken over by performers from the DIT Conservatory of Music and Drama. There was a performance under Keith Pascoe of a symphony French composer Paul Alday wrote in Dublin in the 1820s, and a concert performance of Breakdown, a new opera by Andrew Synnott (which he also conducted), with a libretto by John Breen.

The Alday is a real curiosity, because the early history of the symphony in Ireland is so sparse. Last August Peter Whelan put on a concert that proposed Pierre van Maldere as the man who wrote the first symphonies to be composed in Ireland, as early as the 1750s.

Alday’s symphony may be later, but it can be connected to Dublin with greater certainty. It was hard to judge the merits of this often Haydnesque piece in a performance as untidy as this.

The new opera was delivered with greater confidence, and the large cast took to it with gusto. The scenario is for a stage divided into three spaces focusing on the performance artists Michael Landy (who famously destroyed all his possessions), Barry Le Va (for a famous head-banging performance), Marina Abramovic (with 72 objects to be used on her). There’s also a guest appearance by Joseph Beuys.

The idiom of Synnott’s music is cast somewhere between late romantic and musical theatre, all mixed with a strong sense of pastiche. I couldn’t quite imagine how this would function with Breen’s scenario. A perfect foil? A failed contrast? Only an actual production will provide the answer.

I wasn’t inundated with suggestions for the question I posed in a recent column about a possible Max Bruch of the 21st century. Names that came in from readers included Pierre Boulez (more than once), Brian Ferneyhough and Elliott Carter. But the one that seemed to me to come closest to the spirit of the question was the American Ned Rorem, a prolific songwriter, and a composer with polyglot interests and conservative leanings. Thanks to Jürgen Gahre for the suggestion.

The stay of execution hanging over the Ulster Orchestra since September has been lifted. The orchestra had been facing insolvency as the result of an accumulation of management issues and a series of cuts to its core funding. An 11th-hour solution has been found through a reallocation of funds between Stormont departments.

The orchestra has received the funds necessary to secure its immediate future from Belfast City Council and the Department of Arts. On that basis, the board signed off the accounts and took the decision to begin the search for a new chief executive.

The board also thanked Belfast City Council, the BBC, the Arts Council of Northern Ireland, Minister for Arts Caral Ní Chuilín and the Ministers in the Northern Ireland Executive for their support.