An incurable romantic: who is the Max Bruch of the 21st century?

The German composer clung to the same style throughout his career – do any modern counterparts keep the faith? 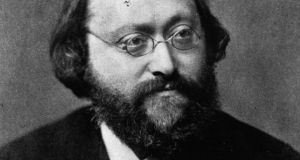 ‘Bruch never managed to reconcile himself with the direction taken by Wagner and Liszt, let alone those who built on their achievements.’ Photograph: Hulton Archive/Getty Images

You have to feel sorry for Max Bruch. He was born in Cologne in 1838, and in spite of some notable successes would spend his life in the shadow of another German composer, the great Johannes Brahms, who was born just five years earlier. As if that weren’t enough, he suffered what must have been an unbearable misfortune in connection with his most successful work, his First Violin Concerto, which he completed in 1866.

He was 30 when the work was premiered in 1868 and at the time was still naive enough to sell it to a publisher for a flat fee. His greatest success, the work for which everyone remembers him today, didn’t generate any royalty income for him throughout the rest of his life.

Bruch lived to be 82, long enough for him to have heard the groundbreaking works of Debussy, Mahler, Strauss, Schönberg, Stravinsky, Scriabin and others, which would completely change the face of music in the 20th century.

But Bruch, who continued to compose right up to the year of his death, 1920, remained always true to the romantic style he had cultivated in his youth. His objections to the musical developments of his time started with much earlier figures. He never managed to reconcile himself with the direction taken by Wagner and Liszt, let alone the composers who built on their achievements. To the end of his life, he and his music remained attached to the world of Mendelssohn and Schumann.

On Friday, the RTÉ National Symphony Orchestra played Bruch’s Double Concerto for Viola and Clarinet of 1911, with Maxim Rysanov and John Finucane the soloists and Alan Buribayev conducting. And, since we’re not much more than a hundred years on from the time of the work, the NSO’s performance started me wondering who the Max Bruch of the 21st century might be. In other words, is there a composer alive and working today whose first success came in the 1960s and whose style has remained largely unchanged over five decades?

When I started looking for likely candidates, most of them in their 70s or older, I realised that the pattern of development would in many cases be the opposite of Bruch’s. Cutting-edge musical style in the 1960s was much more complicated for listeners than it is now. The music of many leading figures of the postwar avant-garde, celebrated for its rebarbativeness in its heyday, softened as they grew older. The compositional techniques involved remained complex, and the demands on performers remained formidable. But the musical surfaces became less challenging for listeners. So one of the options for a Max Bruch today would be a figure who is still holding on to the unreconstructed tenets of 1960s avant-gardism.

Here in Ireland, the country’s two leading senior figures, John Kinsella and Seóirse Bodley, have both made considerable stylistic shifts that tie in neatly with the trend of international developments, not least through the composition of a series of symphonies that might well have seemed anathema to their younger selves.

The leading US minimalists Terry Riley, Steve Reich and Philip Glass all successfully moved from the rigours of the experimental fringes and re-emerged within the mainstream. And the European composer most famously connected with minimalism, Louis Andriessen, has what you might call a prehistory in the world of serialism. Similarly, Estonia’s Arvo Pärt wrote a number of now largely neglected pieces in serial style before he developed the technique he describes as “tintinnabuli”, on which his current success is based.

The longer I thought about it, and the more I asked people for suggestions, the less likely it seemed that I would be able to come up with the name of someone alive today with Bruch’s faithfulness to the style of his youth. Factor in the number of his enduring successes – Scottish Fantasy and Kol Nidrei as well as the First Violin Concerto – and the problem becomes greater.

Sometimes, of course, the elephant in the room is the one thing you don’t see. So if you have spotted what I have failed to see, or if you’d just like to suggest someone as a possible Max Bruch of today, let me know at the email address below.

If you’re a fan of Max Bruch, you will have been delighted to see that the Double Concerto for Viola and Clarinet was receiving its second Dublin performance in a year. The Irish Chamber Orchestra performed it at the National Concert Hall last April with Tabea Zimmermann and Jörg Widmann. Back then, Zimmermann and Widmann delivered the music with energetic glee. Last week, Rysanov and Finucane were altogether more genteel, careful and considered in comparison with the unbuttoned manner of the soloists with the ICO.

Rysanov also played Bartók’s late Viola Concerto with affecting directness and unflinching command. And conductor Alan Buribayev topped and tailed the programme with two early tone poems by Richard Strauss. The irrepressible Till Eulenspiegel sounded a little too scattergun on this occasion, but Buribayev was altogether finer in the more elevated Tod und Verklärung (Death and Transfiguration), music that surely would have given Bruch the shudders.

The RTÉ National Symphony Orchestra’s annual Horizons series of free lunchtime concerts, conducted by Gavin Maloney and focusing on programmes chosen by Irish composers, opened on January 13th. Gráinne Mulvey adopted what she described as a multigenerational approach, including a piece by one of her pupils (David Bremner’s Gap Static), another by one of her teachers (Nicola LeFanu’s Threnody), and two by herself (Diffractions and the Cello Concerto Excursions and Ascents). All were written in 2014, and all were being heard for the first time.

Mulvey’s two pieces are among a number of works she has written that relate to the work of the 19th-century physicist John Tyndall, with whom she shares the birthplace of Leighlinbridge, Co Carlow.

The most substantial of last week’s works, the Cello Concerto, was the least satisfactory. Mulvey is a composer who lives in the world of advanced performing techniques and exploratory sound effects, but these concerns didn’t make for effective writing for her soloist, the leader of the orchestra’s cello section, Martin Johnson.

Her familiar big-boned style was better represented in the shorter Diffractions. Bremner’s Gap Static had a wry, étude-like quality. And LeFanu’s Threnody, inspired by the character Astynax from Brendan Kennelly’s adaptation of Euripides’s The Trojan Women, was quietly gripping.