A weekend of nourishment for the Body and Soul 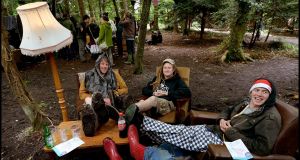 In the sprawling Body and Soul festival site at Ballinlough Castle in Co Westmeath, no pole goes unwrapped in bright fabric. There’s hardly a forest corner that hasn’t been furnished with benches and lights. The trees are in bloom with augmented bursts of paper flowers and the main stage, the most picturesque of any Irish festival, is flanked by wooden windmills, working hard in the weekend’s blustery conditions.

The beating heart of this festival is the beautiful walled garden of the 17th-century castle. This year, capacity has expanded to 6,500 – up 1,500 on last year – and the site has been reconfigured, which is not without its teething problems.

The festival has surprisingly few bars, and punters frequently complain about the lack of toilets. The onsite broadband crashes, leading to problems at the box office.

But these are minor complaints when the music is flowing and spirits are soaring. James Murphy is the major draw on Friday night, packing out the Midnight Circus tent.

The former LCD Soundsystem man puts out a slow-burn disco-fused set that falls short of what he’s capable of. Just as well, then, that the Mother club team are on hand to transform the Reckless in Love stage into a glittering whorl of funk and disco beauty.

Going all the way
On Saturday, nobody is having a better time than Daithí (excluding those in the hot tubs, of course). If you see only one absolutely banging DJ set this year overlaid with frequent, furious bursts of live fiddle and looped pizzicatos, then make it this one. His debut album is out soon; expect him to go all the way.

On the main stage, Kurt Vile and the Violators are showing the muscle and guile at the heart of their introspective rock. After that, an old-school funk and soul outfit should be enough to keep any festival main stage cooking, but Charles Bradley and his Extraordinaires feel underpowered.

One man who doesn’t seem capable of keeping it low-key, though, is Nick Cave. He turns the screws on his set and wrestles with his Bad Seeds band, jabbing and reeling their way to extraordinary sound and fury.

Midnight circus
Meanwhile, the Midnight Circus is living up to its name with the Lucent Dossier dance troupe. They have a reputation for being risqué, but this diverting circus act wouldn’t scandalise a Legion of Mary meeting.

From there it’s a slow slide into the pulsing clubs of the forest dance floors. Yesterday, Wallis Bird put in a shift and a half on the main stage, making more music and energy on her own than most other bands. It’s a terrific start to a day with plenty of promise.

Solange is bringing her well-honed classy soul to the main stage, while Jon Hopkins is showing the Midnight Circus who is boss with his next-generation electronica, and Nicolas Jaar is looking to finish the festival in style.

Together with the packed Wonderlust programme and the pockets of performers – such as the Cut Out Dolls who wander the site putting on ad hoc theatre that veers from the silly to the sublime – they ensure Body and Soul’s reputation as the best boutique festival in Ireland.