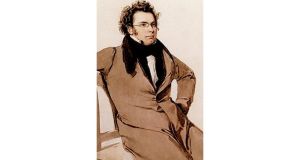 Conor Biggs will sing the complete body of work by Schubert, in 35 recitals spread over 10 years

Conor Biggs is about to embark on a complete Schubert cycle of 577 songs – and he’s looking to Elvis for inspiration, writes MICHAEL DERVAN

Conor Biggs’s current obsession is so unusual that you might be tempted to regard him as a bit soft in the head, an unusual attention-seeker, or perhaps even a singer who’s got his sights set on a place in the Guinness Book of Records.

In May 2011, the Irish bass-baritone, who’s been based in Belgium for nearly two decades, started his Schubertreise, a single-singer journey through the complete body of songs by Schubert, in 35 recitals spread over 10 years. He’s now starting the cycle again, in Ireland, in the National Concert Hall’s Kevin Barry Room, with the first four programmes taking place between now and the end of June. And, yes, he is going to do the songs that are normally the preserve of women, although he’s not going to sing every version of every single song.

He’s opening the enterprise with the song cycle Die schöne Müllerin, and will follow with the songs that were published in the composer’s lifetime. Schubert, he believes, chose what he regarded as his best songs for publication, and his groupings were very carefully thought out. He’ll then follow with the rest of the songs, taken chronologically, and end with the dark chill of the great Winterreise cycle.

Singing was not actually his first musical study. He comes from a musical family. His grandfather was the English pianist Claud Biggs, who taught at the Royal Irish Academy of Music, performed Bach’s complete Well-Tempered Clavier for the BBC in 1926 and for Radio Éireann in 1947, and numbered John Ogdon among his pupils.

His mother was a freelance violinist, and he has fond memories of going backstage when she played in the violin section of what was then the RTÉ Symphony Orchestra. He studied piano with Mary Ellison and Mabel Swainson, and organ with Gerard Gillen, “the first person to instil a real sense of work ethic”. It was the organ he chose to concentrate on, but he took his work to extremes, and suffered what he describes as a burnout when he was 25.

Singing had also been part of his life. He auditioned for the Dublin Boy Singers, but didn’t get in, and at school he also sang tenor roles in Gilbert and Sullivan operettas (“I actually had high As then”), and sang in an ensemble as a music student at TCD.

He identifies two key experiences that oriented him towards singing. “When I was 14, my dad said one day, ‘there’s something you must hear’. He put on Fischer-Dieskau singing Winterreise. I was captivated. And in 1980 I spent an afternoon in David Adams’s sitting room, playing through dozens of Schubert songs, sightreading them. I thought, this is where I want to be. This is me. The scales fell from my eyes. That was really the pivotal moment.”

He went back to college, in Manchester, to study singing, and eventually made the move to Belgium out of economic necessity. “In 1992 I did auditions in Hamburg, Vienna, Amsterdam and Antwerp, and in Antwerp they offered me a job in the Flemish opera chorus. I had no intention of staying, I left after a year, and entered a period of great penury, when I was surviving on two and sometimes one meal a day. That was no fun, I can tell you.

“But I was getting piecemeal work, largely in Renaissance ensembles, and I learnt a lot. It was an eye-opener for me to sing with sackbuts and cornetti [early brass and wind instruments]. The sound is wonderful. And I got to grips with [the work of composers] Obrecht and Ockeghem, and had to read music in strange clefs, which we don’t do in Ireland.”

He endured the vagaries of the freelance world until 2000, when he took up a full-time position in the Flemish Radio Choir.

The biggest influence in terms of the scale of what he’s doing now were the annual Bach cantata concerts, which John Beckett conducted at St Ann’s Church in Dawson Street, Dublin in the 1970s. “They were milestones for me, there were times when you had to be there at least a half an hour early to get a seat.”

And he also has fond memories of “four months of music rehearsals” with Beckett on a DIT student production of Mozart’s Marriage of Figaro. “It must be the stamp collector in me,” he jokes, when I ask why he embarked on a project for which he will have to learn 577 songs. “For many, many years I’ve been thinking there’s such an ignorance among the public and more seriously among singers about presenting great works of the Lieder repertoire. Fischer-Dieskau wrote that the recital is moribund. And it will die if it’s not nourished.

“It has to be nourished by a rediscovery of what made a song, this very close fusion of poetry, the poetry being read in Schubertian circles, and the impulse to write the music. And, basically, I have a ball of a time when I give these recitals, and I want to share that with my public.”

And what does he look for in a recital as a listener? “Intensity of communication, emotion, how the fusion of poetry is related to me as a listener. I’m disappointed by the bland and perfect vocal accomplishment, which I hear on so many recordings.

“Which is not to say that singers shouldn’t try to become vocally masterful. I take my cue more and more from good pop singers. The other day I was looking at an early concert of Elvis Presley. It was fascinating to watch, the body language, the vocal suppleness. Or Jacques Brel. If I could achieve an iota of that man’s intensity, it would be wonderful. Callas had that, too, in the sense of a burning, raw, emotional experience that she could transmit.”