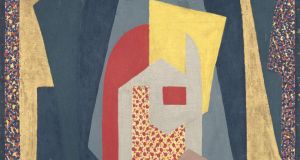 In October 1923 the Irish Times reviewed an art exhibition mounted by the Society of Dublin Painters. The anonymous critic confessed to being puzzled by two paintings by Miss “Maimie” (sic) Jellett: “They are in squares, cubes, odd shapes and clashing colours . . . to me they presented an insoluble puzzle.”

A few days later the paper published a photograph of one of them, Decoration, alongside one of a peculiar-looking onion, under the headline: “Two Freak Pictures”. In post- Civil War Ireland the answer to the question posed by a despairing letter- writer – “Are there not many who can appreciate abstract harmony?” – was probably “No”. Mainie Jellett, like James Joyce, was an Irish artist who would struggle for sympathy in Ireland.

Jellett was 26, a graduate of the Metropolitan School of Art in her native Dublin, and recently returned from Paris, where she had studied with the Cubists André Lhote and Albert Gleizes. Back in Dublin her mission was to introduce the Irish public to modernism. In pursuing this goal she became both the greatest advocate of modern art in Ireland and the prime target for those who opposed it. By 1927 the Irish Times would hail her as “the only serious exponent in this country of the ultra-modernist school of painting” but in 1923 she was denounced as a source of dangerous foreign contagion. Even the relatively progressive intellectual George Russell described Jellett as “a late victim to cubism in some subsection of this artistic malaria” and as the creator of a “subhuman art”.

This reaction was emblematic of the turn towards conservatism in a culture longing for stability and settlement after years of violent upheaval. But it was also curiously misplaced, for Decoration is itself a modernist take on very old themes. Its colours – gold leaf, blue, and red – recall the 15th century religious art of Fra Angelico and the connection is far from accidental. Decoration is in fact a religious painting. The expression of spirituality through art was a vital aspect of Jellett’s modernist mission and Decoration draws on traditional images of the madonna and child. That these references were lost even on a largely Catholic culture underlines the degree to which abstract art was viewed as obscure and incomprehensible.

Despite these attacks Jellett continued to exhibit her abstract compositions. But it was not until Homage to Fra Angelico, in 1928, that critics began to genuinely praise her work. Inspired by Fra Angelico’s Coronation of the Virgin, it marks the beginning of Jellett’s return to figuration. Its favourable reception points to the success of the compromise she was forging between the hard modernism of Decoration and work that could be accessible to Irish viewers.

By the 1930s, Jellett’s abstraction had given way to a hybrid style, which united cubism, religious art and Celtic design, to create spiritual paintings that were both recognisably Irish and modern. Gradually, her achievements were recognised and by the time of her premature death in 1944, Jellett was recognised as both the grande dame of Irish modernism and an artist who successfully translated a foreign abstract aesthetic into a visual language comprehensible to her Irish audiences.

Maggie O’Farrell : ‘I wanted to give this boy, overlooked by history, a voice’
8

Rome vs Greece: a little-known clash of empires
10