Jim Lockhart: On My Culture Radar 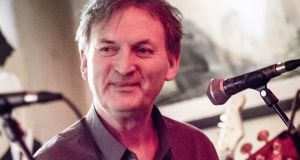 Stephen Hawking’s final book, Brief Answers to the Big Questions. He’s great to read; his stuff is so challenging, you have to stop every so often and think about what he’s just said. And his prose style isn’t like anyone else. “Mordant” is the word that struck me about his laconic, deadpan style. He tosses out these little one-liners and moves swiftly on, and it takes you a moment to realise he’s taking the piss. This book is a bit frightening because he’s pessimistic about humanity’s chances, but it’s still a great read.

Dax in Dublin wasn’t big on my radar but I went there for a family dinner last week and it was a knock-out meal. It was cool, laid-back and very genteel, and the service was friendly. I had duck on a bed of red cabbage, and the starter was baked scallops, which were cooked just right.

I saw Incantata at Galway Arts Festival in 2018. It’s a long poem by Paul Muldoon in memory of Mary Farl Powers, a former partner of his who died of cancer. She was an American artist living in Dublin, who was instrumental in getting printmaking off the ground here. We all knew her from around town, she was an amazing woman with this regal gait and extraordinary assurance. And when she died Paul was devastated and wrote this poem. The amount of work that the actor, Stanley Townsend, did in delivering the poem on stage only intensified the poem. It was a devastating reading, both incredibly powerful and visceral.

I’m enjoying Pat Coldrick’s Ophelia, his third album. What he’s been doing with classical guitar is extraordinary. His vision of what you can do with a soundscape centred on guitar is super. Throughout the album, like in Sí Beag Sí Mor, the arrangements are pin-sharp. I don’t think the country has quite woken up to what we have in Pat Coldrick – he’s a national treasure.

I loved San Francisco from the moment I set foot in it. Apart from the hippy legacy from the summer of love, there’s all the literary stuff, like City Lights booksellers. To be able to go there and pick up an Allen Ginsberg in the same format as when he was alive is something else. The complete oddballs you see on the trolley bus, too. One evening a guy got in dressed as Dracula and started doing card tricks across from our seat. That wouldn’t happen anywhere but San Francisco. Like Dublin, the tech giants have caused a serious housing problem for the natives, so it’s going through serious social upheaval. Still, I look forward to returning.

A few years ago, Aoife Duffin in A Girl Is a Half-Formed Thing as part of the Dublin Theatre Festival was astonishing. She was in pyjamas and there was no set, so there was nothing to help her out – just a wonderful script from an amazing book, and the memory of the abuse that she suffered and how she did, or didn’t, get through it. I came out of it like a dish rag; so did everyone else. No one could speak for a good while afterwards. I don’t know how she did it night after night.

The best thing I heard recently is The Summer of Astral Weeks, an RTÉ Radio 1 documentary. Last year it was 50 years since Van Morrison recorded it, and the story behind it is half-unbelievable. It involves the mafia shooting holes in his hotel door and demanding money from him, and Van representing himself at his own immigration hearing. Tim Desmond and Alan Torney spent about two years getting the original musicians together where the album was recorded, and it shows up what an extraordinary combination of events led to the masterpiece coming out. It’s a brilliant hour’s listen.

For fun, Gary Janetti on Instagram (@garyjanetti) is a hoot. His Instagram feed has Prince George as this sarky little bitch who puts out these utterly bitchy comments about Meghan and Camilla. That brightens my week. The serious one is Seth Abramson on Twitter (@SethAbramson). He dissects the Trump presidency day by day like it was a geometry problem. He’s got a book out called Proof of Collusion. A lot of people are turning to him as their only hope in a dark time. He’s super.

Vice is brilliant. It stars Christian Bale as Dick Cheney. You see him first as a 25-year-old loser, and it takes you right through to when he’s a Washington heavyweight and the real power behind the Bush presidency. It uncovers in exact detail how he got to that position, how much he’s responsible for, and how he managed to not be on anybody’s radar. It’s from Adam McKay, who also directed The Big Short.

Jim Lockhart is musical director for the Peace Love & Protest show at the National Concert Hall, Dublin, on Tuesday, March 12th, marking the 50th anniversary of the student protests at UCD