How Europe's other Capital of Culture became an art-fascist state

A century ago, Rijeka was taken over by a poet who declared himself dictator 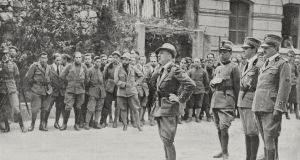 Gabriele D’Annunzio giving a speech in front of legionnaires on March 18th, 1920, in Rijeka, Croatia. Rijeka is, along with Galway, European Capital of Culture 2020. Photograph: De Agostini via Getty Images

In a couple of weeks’ time, the two European Capitals of Culture for 2020 will be up and running. It may not have received much attention in this part of the world, where the focus will understandably be on Galway’s roll-out, but the other culture capital will also be officially launching its programme of events in the first week in February. With apologies to Galway, it’s a rather more interesting and historically resonant place at this particular moment in European history.

In its wisdom, the EU nominates two different cities each year as Capital of Culture. Like Galway, Rijeka (formerly known by its Italian name of Fiume), on Croatia’s Adriatic coast, is currently marking the centenary of turbulent events which saw it exit an empire. In Rijeka’s case, though, the story is even more turbulent than what happened here. It can be seen as the first harbinger of dark events that were to follow in succeeding decades, during which many artists became seduced by ideologies based on violence and hatred. But it’s also a rare case of a place where, for a short moment in history, an artist led a revolution and actually came to power.

Margaritis Schinas is the EU’s vice-president for “promoting our European way of life”, a slightly chilling designation recently introduced by new European Commission president Ursula von der Leyen. In his introduction to this year’s Capital of Culture programmes, he writes that “promoting culture as a core element of our way of life has many positive impacts on society, in terms of social inclusion, integration and economic growth”.

That can indeed be true, if a little platitudinous, but it’s not always the case. Some kinds of culture are deliberately divisive, anarchic and have a totally unpredictable outcome. They can also teeter on the precipice of insanity. Nothing illustrates that better than what happened 100 years ago in Rijeka/Fiume.

In 1919, following the collapse of the Austro-Hungarian empire, the division of former imperial territories in the western Balkans between Italy and the new country that would ultimately be known as Yugoslavia were being debated at an international conference in Paris when the poet, journalist, playwright, aviator and soldier Gabriele D’Annunzio led a paramilitary force into Fiume and declared it part of Italy. In the chaotic months that followed, D’Annunzio repelled attempts to expel him and, in September 1920, proclaimed the city to be part of the Italian Regency of Carnaro, with himself as dictator.

The new mini-state’s constitution provided a prototype for many ideas which would later be adopted by fascism. But it also bore the imprint of D’Annunzio’s own grandiose self-image as an artist-politician. Music, it stated, was a “religious and social institution” which would be “the fundamental principle of the state”.

The constitution adopted the corporatist model which would become fashionable in many countries in the 1920s and 1930s (including in Ireland, where its legacy can still be seen in Seanad elections). But alongside the bodies representing shopkeepers, farmers and factory owners, D’Annunzio also devised a symbolic corporation to represent the “superior individuals”: poets, “heroes” and “supermen”. The futurist poet Filippo Marinetti, who before the war had advocated a new cult of speed symbolised by aeroplanes and car crashes, paid a visit to the city, which he described as “truly futurist”.

There were comical aspects. Lurid tales of drug use and sexual abandon in the corridors of power added to the general sense of a madcap escapade. Although many of the regime’s aesthetics prefigured fascism and there was repression of the local Croat population, there was also a bonkers bohemianism in the air. D’Annunzio’s administration included Belgian poet Léon Kochnitsky, Japanese Italophile Harukichi Shimoi (who tried to teach karate to the Fiuman volunteers) and Guido Keller, a former aviator known in Fiume for being a nudist, a vegetarian and a prankster, who was in charge of a ministry that organised acts of piracy and founded the yoga “union of free spirits”, an association which held discussions open to all on the abolition of money and free love.

There is, inevitably, an Irish connection. D’Annunzio’s government was intent on supporting anti-bourgeois movements around the world, and offered Irish republicans access to a cache of rifles. Probably due to reservations about the unusual morals and esoteric ideology of their would-be benefactors, the Irish prevaricated until the offer fell through.

An exhibition marking the 100th anniversary of these events will run all year in Rijeka. It commemorates D’Annunzio’s regime “by personifying the city as a woman and alluding to his many mistresses who were left physically and emotionally drained after he ended their relationship – just like the city of Rijeka”.

Correction: an earlier version of this article incorrectly referred to Margaritis Schinas as a woman.

Covid-19 and dementia: ‘My father studies me, as if trying to put together a difficult jigsaw’
10