Ronan McGreevy interviews David Knight, Heritage publisher prior to the publication of the Lissadell House Heritage Collection which contains many documents relating to Countess Markievicz and her involvement with the 1916 rising. 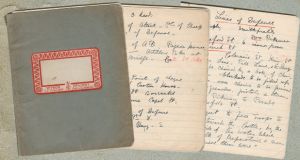 Husband and wife Eddie Walsh and Constance Cassidy bought Lissadell House in Sligo in 2003, after the State baulked at the €4 million purchase price and the cost of refurbishment.

Once acquired, Eddie Walsh set aside a budget to furnish the former home of the Gore-Booths, preferably with much of that family’s memorabilia that had been sold off over the decades.

In 2006 he privately acquired two boxes of Constance Markievicz’s papers from an auction house.

“It was as if somebody took two drawers out of a cupboard and tossed them into a box, and said, ‘Make what you will of that’,” Walsh recalls.

The boxes include two unprepossessing copybooks, one originally from Markievicz’s husband’s home country of Poland, and another a child’s exercise book with transcribed poems from Markievicz’s time in Kilmainham Jail.

The military plans for the Rising are the holy grail of Irish historical documentation. The Rising is the most scrutinised period in Irish history, yet no blueprint or written plans for this seminal event has ever been found.

This is understandable when one considers the extreme secrecy with which the leaders planned the Rising.

Markievicz’s sketchings based on Robert Emmet’s rebellion and her notes on it and the lessons to be learned from it confirm to historians that the Rising leaders did study that episode from 1803 for guidance.

Emmet’s biographer Prof Patrick Geoghegan of Trinity College Dublin said much of what appears in Markievicz’s battle plans are verbatim accounts of Emmet’s own writings.

On September 19th, 1803, the night before he was executed, Emmet sketched out his plans for his rebellion to counter taunts that it had been a poorly thought out affair.

“The second page of the notes, under the heading of ‘Lines of Defence’ is a direct paraphrase of part of Emmet’s plan, with the same streets mentioned,” Prof Geoghegan explains. “The same numbers (for example, 800 pikemen), and the final sentence is a direct quote from the plan and is in inverted commas (‘Object to force troops...receive them there’).

“The transcript also makes many references to Emmet’s plan and the 1803 rebellion. For example, A.M. Marsden was Alexander Marsden, a Castle Under-Secretary in 1803. Rafferty’s cheese shop is mentioned, and Emmet had a plan to rent that shop, which was adjacent to Dublin Castle, and explode a mine in the wall and tunnel in underneath. Emmet’s rebellion was a failure, but it inspired subsequent generations, including the men and women of 1916. ”

Some 113 years separated the 1803 and 1916 rebellions, but many of the streets and barracks were the same.

“In my opinion I would say that Emmet’s plan is the basic plan for the Rising, with amendments to suit the changing times,” said historian Darren Kelly, the joint author of When the Clock Struck in 1916: Close-Quarter Fighting in the Easter Rising.

Such sketches as the above by Constance Markievicz were often used for propaganda purposes by both the IRA and the anti-Treaty republicans.

“Interestingly, however, it is quite clear because of positions mentioned and areas to be occupied that Emmet’s plans were incorporated into the Easter Rising plans.

“This would have been inevitable in any case, as so many of the enemy positions remained in the same locations.

“Only so many options were available at the end of the day - think of the Schlieffen Plan in the first World War, it was broadly repeated with modifications in WW2 - there were only so many ways to skin that particular cat, and the same applied to Dublin.”

Kelly and his co-author Derek Molyneux say the Markievicz document is further proof the rebellion was far from an amateur affair.

“A great deal of consideration was put into their strategic and tactical positioning.

“Additionally, the simple fact that a woman was making military notes at the time is no less ground-breaking than the same woman being elected to Westminster in 1918 - the first woman in history to do so.”

Prof Charles Townshend, the author of many books on the revolutionary period in Irish history, described the document as an “oddity”.

He said it was unlikely that Markievicz was involved in planning the Rising, as she was not in the military council - though she may have tried to glean information from her immediate superior James Connolly, who was.

In any case, no documents from the military council survive to prove definitely who was responsible for what.

“Connolly was co-opted at a late stage and presumably made aware of it - Markievicz will probably have tried to find out things from him and may have succeeded, but that’s different from having an input,” he said.

Dr Lauren Arrington, the author of the recently published Revolutionary Lives: Constance and Casimir Markievicz, said the battle plans demonstrate that Markievicz’s “idealisation of the United Irishmen was not simplistic - she studied Emmet and Tone in depth”.

Also of historical significance are the transcripts of poems smuggled out of Kilmainham Jail by Capuchin friar Fr Albert Bibby.

On the inside front cover, Bibby scribbled a note: “Poems and other writings of Constance Markievicz, most of them written immediately after Easter Week 1916”.

These poems were written when Markievicz was at her lowest ebb. She was awaiting what she assumed would be a sentence of death, and many of her comrades-in-arms were being executed.

One poem in particular, entitled In Kilmainham, expresses these fears:

Despair is in my brain

As if they felt the pain

As if the pain would stop and weep

This is a rare glimpse of vulnerability for the usually indefatigable Markievicz. “Some of these poems express rare moments in which Markievicz expresses disillusionment and grief,” said Dr Arrington.

“Even in her most private letters to her sister, Eva, she is generally positive and optimistic.”

The Walshes have decided to make the copybooks and a series of undated drawings public to mark the centenary year of the Rising.

A conference on the women of 1916 will take place in Lissadell House on the weekend of May 12th to 14th, and an open day will be held in the house on March 20th.

“If Lissadell is to be relevant to this country, it has to be in 2016,” Constance Cassidy said.

Indecisiveness led to home of The O’Rahilly being demolished
8

Is humour an effective way of communicating wisdom?
10