In the lead-up to the Lockout

An Irishman’s Diary: When women took a leading role 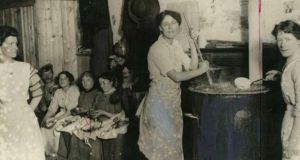 Delia Larkin and Countess Markievicz set up soup kitchens in Liberty Hall, where Larkin presided over the feeding of some 3,000 children per day

While historians generally regard August 26th, 1913 as the beginning of the Dublin Lockout, when tram drivers pinned on their Irish Transport and General Workers Union (ITGWU) badges and abandoned their vehicles in protest against employer William Martin Murphy’s bid to smash the nascent ITGWU, one can trace the origins of the Lockout back to two other events that preceded this strike, both of which highlighted the important role played by women in general, but two brave women in particular, in the events of 1913.

The first event took place two years earlier at W & R Jacob and Co’s Biscuit Company on Bishop Street. On August 22nd, 1911, 3,000 women came out on strike in support of their men – “A procession of the strikers was then formed . . . A great deal of excitement in vent of the strike spirit was manifested . . . Shortly after noon, the strikers were reinforced by some 3,000 girls . . . These latter formed in professional order and moved about” (The Irish Times, August 23rd, 1911).

Jim Larkin opined that the conditions for the biscuit makers were “sending them from this earth 20 years before their time”. The person who galvanised these “3,000 girls” was Rosie Hackett, an 18-year-old messenger at Jacobs, and her successful negotiations led to an increase in wages and better working conditions at the factory.

The plight of women at that time is captured in the words of Annie Ryan, a cigarette factory worker: “Nothing was granted: not your vote, not your education, not your daily wage – all were hard fought for”. Two weeks after the successful Jacobs’ strike, Rosie Hackett was a founding member of the Irish Women Workers Union (IWWU), established to represent women like Annie Ryan and protect them from the Dickensian working conditions then prevailing in Dublin.

As Countess Markievicz said at the founding meeting, “Without organisation you can do nothing and the purpose of this meeting is to form you into an army of fighters . . . As you are all aware, women have at present no vote, but a union such as has now been formed will not alone help you to obtain better wages, but will also be a great means of helping you to get votes . . . and thus make men of you all.”

The second event occurred on July 10th, 1913, in the shadow of Jacob’s factory. Thomas Somerset and Co (Belfast) had opened a linen factory in Golden Lane. More than 100 women were employed there, but rather than receiving a weekly wage, they were paid the (even then) paltry sum of 2d per dozen items which they worked extremely hard to produce. Delia Larkin, sister of James Larkin but a committed socialist in her own right (and co-founder of the IWWU), mobilised the women to seek better conditions and an improvement in their wages. But Somerset and Co stood firm and the factory was closed. However, the exploitation of women in Dublin factories had been brought to light.

The women at Jacobs played a pivotal role in the Lockout of 1913. Three women who refused to remove their union badges were summarily dismissed, but by the end of the day, 1,100 women had come out in support for their colleagues. The subsequent lockout by management was painful for these women; a significant number lost their livelihood. More than 20,000 workers around the city were “locked out” by the bosses, leading to a four-month period of extreme hardship for them and their families. Undaunted, Delia Larkin and Countess Markievicz set up soup kitchens in Liberty Hall. Other visionary members of the IWWU, such as Helena Molony, set up a co-op on Eden Quay to provide work for women who had been blacklisted by employers.

Rosie Hackett never got her job back. But she became a printer and helped print a certain iconic document that shaped a nation and handed it, with the ink still wet, to James Connolly some two and half years later. Given that 13 out of the 16 Liffey Bridges are named after men, would it not make it 14th time lucky if the burghers of this fair city named the new conduit that stretches across Anna Livia Plurabella in the shadow of Liberty Hall after Rosie Hackett?

A Liberties Heritage Association exhibition “Bare Feet and Bowler Hats”, on Dublin 1913 and celebrating the role played by women in the Lockout, runs from tomorrow until September 17th at St Nicholas of Myra Parish Centre, Carmans Hall, Dublin prior to transferring to Dublin City Hall.