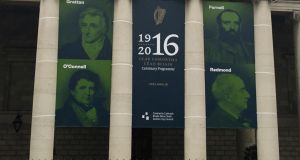 The 1916 banners at College Green Bank of Ireland, with images of Henry Grattan, Daniel O’Connell, Charles Stewart Parnell, and John Redmond, who described the Rising as ’wicked and insane’

Dubliners and visitors alike will be a little confused by the massive banners that Dublin City Council has affixed to the front of the Bank of Ireland on College Green for the duration of the Easter Rising commemoration period.

Who are these men and what role did they play in the events of 1916, the unwary might ask. Were they involved in the Rising itself, or in its planning?

Some of them look as if they date from the 18th or 19th centuries; perhaps they led earlier armed insurrections against British rule, or argued the revolutionary case?

Such are the pitfalls that occur when the State attempts to render the complexities of history in banner form. Dublin City Council, along with the Department of the Taoiseach and the Office of Public Works, have been ridiculed for choosing these men to honour on the occasion of the centenary.

On the other hand, the case is often made that Grattan, O’Connell, Parnell and Redmond represent a tradition of constitutional nationalist politics that made more of a contribution to the achievement of a sovereign Irish State than 1916 or the War of Independence.

And, if you do accept that argument, then the best place in the city to mark that contribution is on the front of the building that used to be “Grattan’s Parliament”, and was the nearest Ireland came to peaceful self-determination before the 20th century.

These are, the council has pointed out, only one set of a number of banners being raised across central Dublin this week; others will feature the signatories of the Proclamation and the role of women in the Rising.

Still, because College Green is one of the focal points of the city, it seems odd to drape it at this historical moment with images of four men whose philosophies were so deeply at odds with those of the 1916 rebels. (Redmond, the only one alive at the time of the Rising, described it as “wicked and insane”.)

If the intention was to be inclusive, or simply representative of all strands of Irish history at the time, then why stop there? Why not include Edward Carson, a famous Dubliner, as well? Carson was, after all, the representative of those Ulster Protestants to whom the Proclamation was referring when it spoke of “cherishing all the children of the nation equally”.

Or why not look to the stirring, if historically dubious, words of the Proclamation itself, currently being disseminated to every Irish schoolchild?

“In every generation the Irish people have asserted their right to national freedom and sovereignty,” it reads. “ . . . six times during the past three hundred years they have asserted it in arms.”

Any accurate reading of that sentence would surely call for a banner featuring assorted Fenians and Young Irelanders, along with Wolfe Tone, Robert Emmet and possibly Patrick Sarsfield thrown in for good measure

The truth is that this is a minor misstep on the part of the council and the Department of the Taoiseach. If they had put their other banners up first, then the ones on College Green might have seemed less glaringly out of tune with the occasion.

Some will say it’s not surprising that a Fine Gael-led government should do something of this sort. The Government was criticised for its first promotional video for the centenary, which seemed to suggest the rebellion took place so that we could all have Facebook and high-quality coffee.

Since then, it has carefully and mostly successfully negotiated a route across the many eggshells laid in its path.

But the incident shows yet again that the events of 1916 and their legacy remain contested. In its own way, a small fuss over a big banner in the city centre is a useful reminder of that.