A year of upheaval 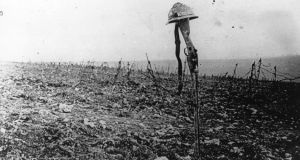 There are “decades where nothing happens, and there are weeks where decades happen,” Lenin wrote of the tumultuous days of the Bolshevik revolution. He might have said the same of the week, a year later, when the Central Powers collapsed and the first World War came to an end.

When the guns fell silent along the western front at 11am on November 11th 1918, triumphalism soon gave way to mass mourning. The war had killed an estimated 17 million people, of which around seven million were civilians. A generation had been wiped out or grievously wounded, and the economic cost was catastrophic. Physically and psychologically, Europe was left deeply scarred.

In Ireland, the war’s final months played out against a background of domestic upheaval. The Germans’ Spring Offensive, designed to win the war before the United States entered the fray, had destroyed the 16th (Irish) Division. The deadly flu pandemic of 1918 claimed 20,000 lives in Ireland; globally, it killed more people than the war itself. And in October, the mailboat RMS Leinster was struck by German torpedoes off Kish Lighthouse, off the Dublin coast, leaving around 500 people dead.

In Ireland as in the rest of Europe, war acted as a catalyst of social and political change. A British attempt to impose conscription in Ireland after heavy battlefield losses that Spring drew intense opposition led by trade unions, nationalists and the Catholic church – a backlash that culminated in a general strike and hardened public opinion against British rule. It was the year in which Irish women were given the vote for the first time, albeit only those over 30 who met a property qualification. In March, Irish Parliamentary Party (IPP) leader John Redmond died suddenly, and by the end of the year, his party – the dominant force in nationalist politics for nearly 50 years – would be obliterated at the polls. The December election was a watershed; Sinn Féin won 73 seats, the IPP just six. The winner of the Dublin St Patrick’s constituency, Sinn Féin’s Constance Markievicz, became the first woman elected to the House of Commons.

Across Europe, the war radicalised politics. As John Horne and Robert Gerwarth point out, communism, nationalism, liberal democracy and socialism would face off in the inter-war years, and as soon as the fighting ended, new geopolitical convulsions began. The military collapse of the Central Powers precipitated the collapse of three vast, centuries-old empires: Ottoman, Habsburg and Romanov. Violence, revolutions and border wars broke out as the new nation-states fought to carve out their place on the map. Poland, Lithuania and Finland would experience violent birth pangs – as, of course, would independent Ireland. In the five years after the 1918 armistice, or ceasefire, over four million people would lose their lives as a result of civil wars or inter-ethnic struggles. At least some of those successor states would prove unstable, and eventually give way to authoritarian dictatorship of one kind or another.

It was the “war to end all wars”, David Murphy reminds us, but as the world would soon find out, it had done nothing of the sort.