A pause for thought

An Irishman’s Diary about the importance of commas 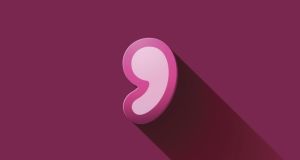 “My own commitment to the employment of commas wherever possible is in part altruistic.” Image: Thinkstock

As an ardent supporter of the comma, in all its forms, I welcomed a letter in the New York Times recently. It was from the writer Ann Patchett, who had felt it necessary to clarify the paper’s mini-review of her essay collection This is the Story of a Happy Marriage.

I know part of the anti-comma argument is that it slows sentences down, robbing them of drama. And you certainly could not have complained about lack of drama in the NYT’s sentence, which had claimed that Patchett’s essay subjects ranged from “her stabilising second marriage to her beloved dog”. The frisson was, however, unwarranted. As Patchett explained in the letter, she is indeed married, but only to a fellow human, her husband Karl. The dog is married too, apparently – the ceremony was a charity fundraiser. But that also was a single-species event.

So, as Patchett pointed out, if the paper wanted to make clear that “her stabilising second marriage to her beloved dog” were two points in a range, there really needed to be a pause after “marriage”. QED.

My own commitment to the employment of commas wherever possible is in part altruistic. I’m convinced that, when unfairly discarded, they often turn into redundant apostrophes, and then start hanging around grocery shop’s and other place’s, making nuisance’s of themselve’s.

That’s why I’m also a proponent of the Oxford comma (eg the second one in the sequence “apples, oranges, and pears”), controversial as it is. There are two schools of thought on the issue, I realise, and as the grammarian Lynn Truss has warned, you should never get between them when there’s drink taken.

Hang your heads in shame, anti-Oxford-comma campaigners. And don’t even think about trying to justify that sentence on grounds of entertainment.

Speaking of New York, I read something equally curious a while ago in another of that city’s august publications, the New Yorker magazine. It was about the young Republican senator Marco Rubio, a possible future presidential candidate, who the magazine suggested had taken to “donning the mantel of the late Jack Kemp” (a former candidate for vice-president).

I suppose anything’s possible. People have donned stranger things than mantels, especially at Halloween parties. But I don’t know. Some of those regency marble surrounds weigh a ton. And although the New Yorker didn’t give any detail about Kemp’s fireplaces, I doubt a US vice presidential candidate would skimp on that sort of thing.

It reminds me of a story I’ve just made up about an Orangeman who used to burgle houses in his spare time. Caught in the act one night, he had to make a hasty retreat through a window that was too small for him. Such was his panic, he wrenched the window free from its surroundings and continued his escape, frame and all. The event was later immortalised in a ballad, The Sash My Father Wore. You still hear it sung, occasionally.

If it had been a publication less prestigious than the New Yorker, mind you, I would have assumed the writer had made a simple mistake and meant “mantle”, an actual item of clothing, often worn in metaphor. In fact, as a figure of speech, it dates from biblical times. And there was a very apt opportunity for its use in London earlier this week, courtesy of one Bob Geldof.

Geldof was giving evidence for his friend, former British government chief whip Andrew Mitchell, in a libel case arising from “Plebgate” – the incident wherein Mitchell is alleged to have called policemen “plebs”. So, donning the mantle of Roman plebeian, Geldof insisted his patrician friend would never use such a term, even to him. And to underline his humble status, Geldof then described himself as coming from a “poor”, “Irish”, and “not particularly well educated” background.

That last sentence, by the way, has another example of the Oxford comma. But you may be thinking there’s still a piece of punctuation missing. As we on this side of the water know, Geldof went to Blackrock College, that fee-paying bastion of patrician Ireland. So yes, for correct grammar, his description of himself as poor, Irish, and under-educated should of course be accompanied by a long string of exclamation marks.