Zootropolis review: now here’s a plot you can really, ahem, sink your teeth into

With a plot that unfurls with all the sinuousness of a PG-cert Chinatown, Disney’s latest box-office smash is one of their best 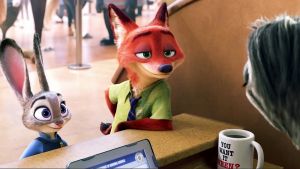 There are creaks and leaks within the metaphor at the centre of this otherwise delightful new animation from Walt Disney Studios.

We are set down in a city where all sorts of animals (aside from humans) live in relative harmony. Rodents emerge amusingly from the toy-sized Lemming Brothers Bank. Sloths process forms for motorists. The mayor is a lion. His assistant is a sheep. And so on.

Zootropolis is actually about something. When a plucky rabbit named Judy Hopps (voiced by Ginnifer Goodwin) secures a job with the police department, she runs up against ill feeling from the larger animals.

The real tension in the city, however, proves to be between “predator” and “prey”.

When some of the former turn nasty, Judy is among those who suggest that the more toothy animals are returning to their nature. Does this work as a metaphor for racial discrimination? Doesn’t it kick up all kinds of undesirable connotations? Aside from anything else, tigers really do eat rabbits. Right?

Anyway, the animation is so cute and the jokes so tight that this central insecurity is easily overlooked. More impressive still, Zootropolis (which was bewilderingly re-titled after emerging as Zootopia in the US) has a plot you can really, ahem, sink teeth into.

Joining forces with a fox named Nick Wilde (Jason Bateman), Judy investigates a conspiracy that unfurls with all the sinuousness of a PG-cert Chinatown.

Making it clear that they know they’re on to a good thing, the writers end the story by pointing shamelessly towards sequels.