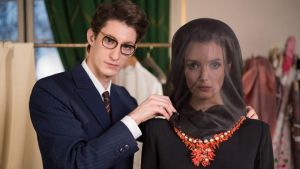 You would be surprised if any film about Yves Saint Laurent ended up looking like something le chat dragged in. Sure enough, this study of the designer – the first of two released this year – offers enough delicious opulence to comfortably upholster half a dozen films. Pierre Niney has the angular Joe 90 looks of the great man and does a good job of conveying his notorious psychological frailty. Nobody could hate a film that stars Nikolai “Son of Klaus” Kinski as a young, believably demonic Karl Lagerfeld.

Still, it all feels a bit, well, prêt-à-porter: smoky cafes in the 1950s; swinging Marrakesh in the 1960s; too much cocaine in the 1970s. Your average high street film-maker has been knocking off such cheap copies for generations.

The picture hangs itself around the relationship between Saint Laurent, a prodigy raised in French Algeria, and Pierre Bergé (Guillaume Gallienne), his life partner and business manager. If the film is to be credited, the relationship was a perfectly complementary one: Saint Laurent was unpredictable, flighty and irresponsible; Bergé was reliable, organised and realistic.

When Christian Dior sacks Yves following a breakdown down during a doomed period of military conscription (in contrast, Elvis seems like the ideal soldier), Pierre takes him in hand and sets about launching the influential YSL brand.

Sadly, the film never really raises the bonnet on that relationship’s engine. More seriously, it fails to communicate just what it was that made the clothes so emblematic of their era. A girl wears a tuxedo and everybody cheers. Another girl sports a designer slicker and all jaws drop. Some sort of context or examination of the creative process would have been most welcome.

Then again, you might argue that an exercise in style over substance is just what we need for a study of the fashion industry. If you get my drift.

Mubi: online repertory cinema for a handful of change
8