After 17 years the franchise seems tired, despite some star performances 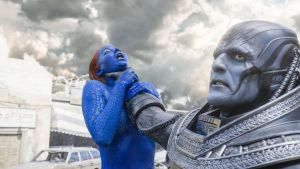 With a nod to the profoundly unfashionable Chariots of the Gods (not to mention the recent swords and sandals mega-flop Gods of Egypt), the ninth film from the X-Men sequence opens in ancient Egypt, where En Sabah Nur (Oscar Isaacs, criminally wasted) aka Ra, the Sun God, aka Apocalypse aka Fuzzy Bunny (no, not really) has spent centuries syphoning out gnarly powers from other mutants to become a super mutant. Fisticuffs ensue and the super mutant is buried, only to emerge during the Reagan era.

So what, exactly, does this fearsome entity with mad skills want with four flunkies? Does he need his bins taken out? And what’s worse, one of the quartet is Olivia Munn’s mesmerisingly useless Psylocke. Her super powers include: holding her laser rope/sword the right way up, standing with her legs shoulder-width apart and dressing like a stripper.

Meanwhile, lining up for the white hats, James McAvoy’s Professor X is joined by charming new team additions Jean Grey (Game of Thrones’ Sophie Turner), Kodi Smit-McPhee’s Nightcrawler (another scene stealer), Tye Sheridan’s Cyclops and J-Law, who, making the most of her star wattage, dispenses with some of the blue skin in favour of looking like J-Law.

Highlights include an unsurprising (yet welcome) star cameo and the most elaborate screen runaround to date for Quicksilver (Evan Peters). Low points include: the 15 minutes required for every single X-Man to remember to use his or her powers; a total failure to make merry with the Cold War backdrop; and an endless, and endlessly fluffed hyper-mega-global destruction scene wherein pixelated versions of world monuments are blown into still more pixels ad nauseam.

Returning director Bryan Singer birthed this successful franchise when the Marvelverse was still capable of producing flops (Punisher) between hits (Blade and Spider-Man). Seventeen years on, the sequence feels almost as old as its sorry antagonist. Time for X to take some zzzz, perhaps.