Three Identical Strangers: An adoption story with a sinister secret 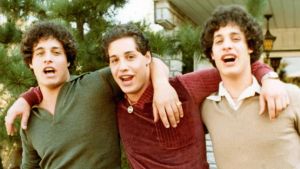 “When I tell people my story, they don’t believe it,” says Robert Shafran at the top of Tim Wardle’s astonishing documentary, Three Identical Strangers. In autumn of 1980, Robert arrived on the campus of an upstate New York university where he was greeted by students who appeared to know him.

Following an amazed exchange, the former roommate of Eddy Galland drove Shafran to Long Island, where Robert met his duplicate. After their story was picked up by various newspapers, Robert and Eddy were joined by a third brother, David. The triplets were born on the same day and adopted at six months old from a “premiere” Jewish agency, Louise Wise Services. Neither they, nor their families, knew they were part of a set.

It sounds like a fairy story and for a while it is. The brothers became a favourite TV attraction, appearing with Phil Donahue, Jane Pauley and others. They have a cameo in the Madonna movie, Desperately Seeking Susan.

Working with Irish editor Michael Harte, director Wardle crafts an impeccable sequence of reveals in Three Identical Strangers that takes in a refugee from the Holocaust, unethical scientific design, and files that can’t be opened until 2055.

Clear, candid testimonies from family members, The New Yorker’s Lawrence Wright, and the brothers themselves make for a story that effortlessly segues from feel-good to tragedy to full-blown conspiracy. Even the reenactments – so often a misfire in the genre– are carefully and economically used. A sure-fire Oscar contender.

Timeline of the 1980 hunger strike