The Truth review: Tender moments that stay long in the brain 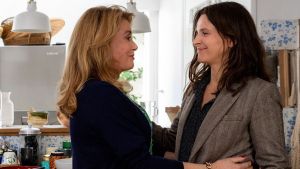 As Bong Joon-ho will shortly discover (and how), following up your first Palme d’Or – particularly after a lengthy, celebrated career – is never the easiest task for a busy film-maker. Expectations are high. An acceleration is expected.

The much admired, always prolific Hirokazu Kore-eda, whose Shopkeepers took that award nearly two years ago, did not break his step on the way to an intriguing meeting with such tasty collaborators as Juliette Binoche, Ethan Hawke and (you may need to take a seat, Grandma) the regal Catherine Deneuve.

Critics were a bit tepid when The Truth premiered at the Venice Film Festival, but, after being left to breathe for a few months, the bouquet is revealed in all its lovely complexity. Few critics in a blind tasting would identify the picture as the work of Kore-eda. For outsiders at least, his dissection of Japanese social mores is wound into the aesthetic.

The characteristically measured unravelling of familial tensions – Deneuve is magnificent mum to Binoche’s less precious daughter – is, however, very much in keeping with previous Kore-eda gems such as Our Little Sister and Like Father, Like Son. The Truth is an irresistible meeting of cultures.

One can see why some critics have approached The Truth with suspicion. Too often, when making their first film in a language other than their own, great directors get lured into star-heavy puddings that collapse beneath the weight of their ill-conceived ambitions. (Wong Kar-Wai’s My Blueberry Nights springs to mind.) Indeed, the film reads, on paper, like a parody of such things in the French comedy series Call My Agent.

Catherine Deneuve plays Fabienne, a great actor who has just written an autobiography titled – with an accompanying clunk – The Truth. Binoche is her daughter Lumir, a screenwriter. Hawke is her son-in-law.

It doesn’t quite sound like a real film. But it works. The temptation to nudge Deneuve towards Grande Dame theatrics are not entirely resisted. In one glorious scene, she has it explained to her that many of the great stars started both their names with the same initial: Greta Garbo, Danielle Darrieux, Anouk Aimée.

When someone suggests Brigitte Bardot, Fabienne – or Deneuve – makes the tart-lemon face that only French ladies of a certain age can manage. Citizens of other nations would need a vertebrae removed to look so loftily down their own nose. Deneuve manages it like an everyday breath. (It may just be coincidence, but, 60 years ago, Bardot starred in a classic film called The Truth for Henri-Georges Clouzot.)

For the most part, however, Kore-eda keeps the drama at his customary civilised temperature. Lumir and her family arrive at Fabienne’s house and get drawn into conflict over, among other things, the truths, half-truths and outright porkies in her forthcoming book.

Always at home to emotional streams that run beneath the surface, the director eases rather than shoves us towards an understanding of the unspoken tensions. “I can’t find any truth in here,” Lumir grumbles. Fabienne continues to treat her art like others might a religious vocation. “I’d prefer to be a bad mother, a bad friend but a great actress,” she says. The looming presence of a nearby prison reminds us that this is the most walled-off and bourgeois of environments.

Kore-eda uses a film within the film – an unlikely science-fiction thing – to underline barely spoken truths and to hint at some that are entirely unsaid. Binoche is uncharacteristically grounded as something close to an eyes-of-the-audience figure. Hawke makes something likeable of a second banana who seems keen to fall off the wagon.

It is, however, the tender, lightly sketched moments that stay longest in the brain. The image of Deneuve dining in a Chinese restaurant with only her little dog for company deserves instant icon status. We shall not see her like again.