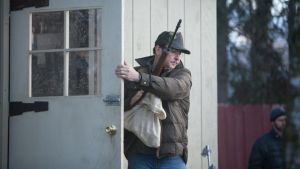 There was, about a decade ago, a vogue for distastefully explicit studies of famous US serial killers. Ted Bundy and Ed Gein were among those getting the full feature treatment. On paper, The Frozen Ground reads as if it’s treading in similar territory.

The picture concerns the hunt for Robert Hanson in the early 1980s. Believed to have killed as many as 21 women in the Anchorage area, Hanson is now serving time in an Alaskan prison.

The Frozen Ground does have its fair share of dubious moments. We watch as Hanson – in the surprising form of John Cusack – kidnaps a girl, ties her up in the basement and ultimately releases her into the wild, where he stalks her with a sniper rifle. But this is a more responsible film than those earlier, less tasteful exercises.

Watch the trailer - The Frozen Ground

Based on the memories of Cindy Paulson, a sex worker who escaped from Hanson’s car and identified him to police, The Frozen Ground is strong on procedural detail and determined in its identification with the victims.

Nicolas Cage plays detective Jack Halcombe, a variation on the real officer on the case, as the sort of cop Cage normally plays: harried, eccentric, horse-faced. When the police fail to follow through on Paulson’s evidence, he commits himself to hunting Hanson down. Vanessa Hudgens, always serious about her work, makes something simultaneously vulnerable and determined of the admirable Ms Paulson.

Cusack does rather layer on the stock serial-killer ticks – sudden outbursts of shouting, a tendency to shuffle about the room – but his ordinary-Joe integrity skews the performance in surprising directions.

The film does have some glaring deficiencies: the denouement is too sudden; the period detail is non-existent; the details of Halcombe’s home life are plain confusing. But The Frozen Ground remains a respectable engagement with a subject that could too easily have been rendered salacious. You could do much worse.