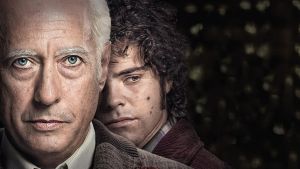 In the 1980s, the Puccio family became notorious in their native Argentina for kidnapping and sometimes killing their wealthy neighbours. Director Pablo Trapero, that reliable purveyor of cinematic thrills (Carancho, White Elephant), transforms this real-life saga into a film that functions as both a slick, pop-scored Scorsese-alike crime flick and an unsettling study of political and personal perversity.

Trapero carefully frames the family as a logical extension of the recently fallen dictatorship. The family’s terrifying patriarch, Arquímedes Puccio (the glacial-eyed Guillermo Francella) rails against the country’s fledgling democracy as “the motherfuckers that sold these country”.

It’s business as usual for this pillar of the community, and business means keeping friends and neighbours bound in the basement: how else is Arquímedes supposed to be a good father and provider? “I will never put my family at risk,” he insists.

This twisted bourgeois logic recalls the swivel-eyed fictional families of We Are What We Are and Dogtooth and, sure enough, for Arquímedes, kidnapping and extortion is a family affair. His curly-haired son Alejandro (Peter Lanzani) is hailed as a rugby hero within his elevated social circle. Yet he does not shirk when dad insists he lure one of his chums from the rugby club.

Back at the kitchen table, Arquímedes helps his daughter with maths homework. Trapero leaves us wondering just how much the mother and daughters – who, in real life, did not serve jail time – know. The men of the family, meanwhile, are involved whether they like it or not. One son, Guillermo, leaves the country to escape his fate. But ultimately even Alejandro comes to question his tyrannical father.

This chilling portrait of patriarchal entitlement makes playful use of highly inappropriate music cues (The Kinks’ Sunny Afternoon was surely not composed with such brutality in mind) and claustrophobic camera work by Julian Apezteguia.

Even the clever Trapero can’t quite reinvent the wheel: the familiar beats of the crime saga – the rise, the fall, the giddy violence, the Achilles heel – are all present and correct. But the dark political and societal subtext makes for a new, discombobulating sensation.

Where did it all go wrong for Johnny Depp?
9