The Favourite was savage, Eighth Grade gave us hope, Apollo 11 was cool and magical

The Favourite stars Olivia Colman as a frail queen Anne while her friend Lady Sarah (Rachel Weisz) governs the country in her stead . 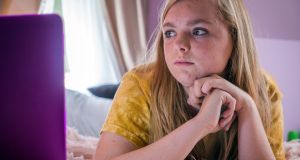 Eighth Grade: A humane film that recognises there is kindness among the jabbering hostility

It’s the time of year when we invite people to say: “Was that this year? It seems like ages since that came out.”

There will be a little less of that in our consideration of the best films released in the first half of 2019. The lag from the 2018 Oscar seasons seems, for some reason, less conspicuous than is usually the case.

The Favourite, released here on New Year’s Day, does stick out a bit. Green Book and Vice, fellow best picture nominees, also emerged in 2019, but we thought they were only okay. So, here we are.

At time of writing, box office pundits are in a state of confusion. Now suiting up for an apparent re-release, Avengers: Endgame is slowly creeping towards the all-time box-office record held by Avatar. Captain Marvel did well. So did Aladdin.

Away from those behemoths, the market seems quiet. Yet The Favourite took close to $100 million and Nadine Labacki’s Capernaum – no obvious blockbuster – garnered $68 million, thanks largely to unexpected Chinese support. The lesson is that there are still ways of flogging interesting films to relatively large audiences.

There are few obvious themes running through our selection. If you insisted upon discerning a mood it would have something to do with loosely focused discontent. Labaki is worried about poverty. Ciro Guerra and Cristina Gallego are worrying about the narco-trade. Ali Abbasi is worrying about social exclusion. At least there are some messages about the virtues of endeavour in Apollo 11. It’s a shame the film takes place 50 years ago.

The story behind the film deserves it own documentary. In 1972, Sydney Pollack shot the recording of Aretha Franklin’s Amazing Grace album in an LA Baptist church. Due to a technical error, the film was shelved. When Elliott sought to restore it in the current decade, Franklin sued for appropriation of likeness. A year after her death, we finally get one of the finest concert films ever released.

The increased alienation that comes with social-media addiction is among the era’s unavoidable themes. Burnham’s study of a teenage girl squaring up for high school is not afraid to press home those anxieties, but, thanks to a charming performance from young Elsie Fisher, Eighth Grade leaves us feeling hopeful for the coming generation. A humane film that recognises there is kindness among the jabbering hostility.

Based on a novel by John Ajvide Lindqvist, author of Let the Right One In, this bewildering, uneasy Swedish film again allows ancient myth to untangle contemporary worries. An eccentric, misused customs officer uses her apparently supernatural abilities to sniff out not just drugs, but also guilt itself. We soon suspect she may be a very Scandinavian class of super-being. The film has much to say about otherness, but never forgets to tell us a macabre story worth hearing.

Ignore the clunky narrative hook: an underprivileged kid tries to divorce his own parents for bringing him into an unforgiving world. Capernaum is a searing treatment of poverty in the style of the Italian neo-realists. The young hero struggles with seemingly insurmountable obstacles as he fights his way about the streets of Beirut. The film is often hard to watch, but it still managed to clock up unprecedented ticket sales in China. That helped it become the highest grossing Arabic film ever.

What do you do after unexpectedly winning the best picture Oscar? If you’re Barry Jenkins you build on Moonlight with a gorgeous, poetic variation on an admired novel by James Baldwin. KiKi Layne and Stephan James are wonderful as two young people caught up in the discriminatory racial politics of the 1960s. Regina King won an Oscar for her turn as a mother who won’t just roll over.

CAN YOU EVER FORGIVE ME?
Director: Marielle Heller

From the moment Melissa McCarthy first faces Richard E Grant in this dark, quasi-comic true story the couple was assured a place in buddy-buddy history. McCarthy is Lee Israel, the biographer who turned to forgery after falling on hard times. Grant is her dissolute pal and enabler. The film tells some very sad stories, but it is buoyed by wit and empathy throughout. A great queer film. A great New York film. A great cat film.

“Well, duh!” as Queen Anne might say in Lanthimos’s savage analysis of rivalries in the English court. It is some measure of the director’s talent that he took somebody else’s script – originally a more conventional story – and turned it into a worthy successor to The Lobster and The Killing of a Sacred Deer. It still defies belief that Olivia Colman actually got the Oscar she deserved for playing the queen. That so rarely happens.

A magical realist Godfather. Guerra, director of the hallucinatory Embrace of the Serpent, now working with his producer Cristina Gallego, delivers a drug-empire epic like no other. Set largely among the Wayuu people of northern Colombia, the picture takes us from early dealings with small-time US pot smokers to the narco-wars of the 1980s. Money corrupts the indigenous heroes, but they never shake their connections to the spirits that guided the tribe from antiquity.

Think nothing else needed to be said about the moon landing? Think again. Restoring much unseen 70 mm footage, Miller takes us from launch to splashdown with a cool lucidity that does nothing to demystify the magic of the experience. The images from space are, of course, startling. But it is the clean, gorgeous shots of a hopeful Earth that really sets one back.

This is what they call a “divisive” film. For once that’s not just a euphemism for “badly reviewed”. As many people loved Corbet’s pop epic as felt properly repelled by it. Natalie Portman stars as the singer who, witness to a school shooting when young, grows into a stroppy legend with a savage line in dismissive snorts. The first half is the best Lars Von Trier film in a decade. The second half is diva drama of the highest order.

Why does philosophy have a problem with race?
3

Colin Farrell: ‘I was such a pisshead and a druggie I didn’t have many friends’
6

Dolph Lundgren: Grace Jones would bring as many as five girls back... ‘Exhausting’
7