Serena review: Lawrence and Cooper together again? We’re afraid so 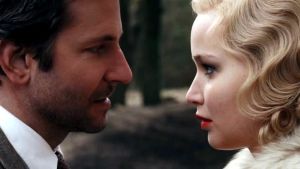 Susanne Bier’s extravagantly cast adaptation of Ron Rash’s much-admired novel Sabrina has been searching for distribution for well over a year. To put it in perspective, Jennifer Lawrence and Bradley Cooper – seemingly manacled together these days – shot Serena in between Silver Linings Playbook and American Hustle. What kind of catastrophe are we looking at?

Well, the picture is very nicely appointed. Beginning with a glossy equestrian meet-cute that suggests Hitchcock’s Marnie without the frigidity, the story finds Cooper’s slippery logging magnate marrying Lawrence’s go-ahead pistol – the titular Serena -- and transporting her back to his camp in North Carolina. There, she quickly demonstrates her way with an axe and her gift for charming eagles. Heck, Wagner might have written operas about this woman.

The Czech Republic puts in a terrific performance as the American South. Mists roll deliciously through verdant forests. No sky is anything other than mythic. The costumes are all lovely and Morten Soborg’s camerawork is exquisite.

Unfortunately, the story rapidly plunges into melodrama and no character has any convincing motivation. Hints at unresolved passion do crop up. Bradley’s former lover stares menacingly as Serena steps off the train. There is a suggestion that Bradley’s right-hand man (David Dencik) might have sexual feelings for his boss. None of this quite explains the descent into dime-store madness that overcomes the film in its later stages.

A more surprising issue is the startling inertness of Jennifer Lawrence. Serena is, presumably, supposed to come across like a force of nature in the Barbara Stanwyck or Joan Crawford tradition. But a softness round the edges makes her seem petulant rather than fearsome, trivial rather than determined. Though she doesn’t sparkle much in the X-Men films, this is Lawrence’s her first genuinely poor performance. Not to worry. Nobody is likely to see the thing.