Scott Eastwood: Clint’s son rises, but under his own steam 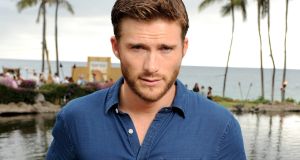 Scott Eastwood: ‘The film business is not a business where, just because your dad is an actor, you get to be an actor. It’s like any other line of work.’ Photograph: Getty

Scott Eastwood greets me with an enthusiastic handshake before chilling back into a cross-legged pose on the couch. I can’t imagine his dad sits this way during interviews. Or maybe now I can. Much has been made of the uncanny likeness between Scott and the younger Clint Eastwood, a resemblance Scott playfully emphasised by dressing up like dad’s nameless Dollars Trilogy badass last Halloween.

Yet family ties – in addition to the famous family patriarch, Scott’s sisters Alison Eastwood and Francesca Fisher-Eastwood are also actors – have not necessarily been helpful in the young actor’s chosen career.

“That’s just not how it works,” says Scott. “To be honest, the film business is not a business where, just because your dad is an actor, you get to be an actor. It’s like any other line of work. It’s all built on reputation and on your work ethic. There are a tonne of talented people out there. But they are too hard to work with. Or they are a pain in the ass. Or they just don’t have the drive or dedication. It doesn’t matter who you are: it doesn’t mean they are going to be putting you in movies. You can’t just show up.”

There’s certainly no suggestion that Clint Eastwood ever put in a quiet word or Make-My-Day on his son’s behalf either. On the contrary, while Scott has appeared in a number of his father’s films – notably Flags of our Father, Gran Torino, Trouble with the Curve and Invictus – he failed to get a callback for American Sniper. That must have been a short conversation?

Scott’s mother, Jacelyn Reeves, was a flight attendant when she met the then-married Clint. Their affair lasted for years: Reeves and Eastwood also have a daughter, Kathryn. Clint, however, has remained – literally and figuratively – a big presence in his kids’ lives. Scott spent many of his formative years on his father’s ranch in Northern California and so much time on his father’s film sets that he can’t rightly recall the first time he visited one.

Tellingly, when he first started auditioning, he used Reeves, his mother’s name, rather than Eastwood. He needed to know he could make it on his own.

“I thought I’m just going to give this thing a shot,” he says. “And if it doesn’t work, then I can go and be a firefighter.”

His dad, not a big fan of handouts, left Scott to pay his own way through Santa Barbara City College and to struggle through the lean early years of his career. By night, he tended bar near his San Diego home, by day, he commuted to LA for auditions.

“Ah ha,” he grins. “Apparently I was doing it wrong, if I get a chance to go back I’ll make things right. You know that old joke? I spent half my money on girls and fast cars: the rest I wasted? I didn’t do any of that. That’s not how my dad does things. He grew up in the Great Depression. His family had no money. He had no money. So he had to work. For everything. And he made sure his kids were going to do the same. I worked as a bartender. I worked as a valet.”

Looking back he’s glad he wasn’t handed anything on a plate. He uses words like “grateful”, “gracious” and “lucky” early and often: “I know the value of things,” he says. “I have basic life skills. I can change oil in my car. Because I used to have to change oil. I was broke and that would save money.”

“It was easy for me in that regard,” says Eastwood. “I’m the rookie and I play the rookie. Fitting, right?”

Some commentators have noted that Eastwood and, indeed, his character – if you squint just right – is a kinda/sorta replacement for the late Paul Walker, who died during the filming of Fast and Furious 7. Last spring, various outlets attempted to kick up controversy by suggesting that Michelle Rodriguez was (appropriately) furious to discover that Scott was replacing Paul Walker. (In fact, she simply respectfully said: “nobody will ever fill that role”.)

Eastwood, who first met Walker on the set of Flags of our Fathers and who describes the late actor as a “big brother”, is keen to dismiss any comparisons.

“In no way am I replacing Paul. My role isn’t even like that. My guy is the stickler for the rules rookie. Paul was a very close friend of mine so I thought this was a great way to reconnect, I guess. Becoming part of something that was a part of his life. And being around people who were talking about him.”

I’m not sure what the correct collective noun is for action heroes. An explosion of Stathams? A crag of Rocks? An engine of Diesels? But I do wonder if the famous on-screen-off-screen Fast and Furious family aren’t ever affected by a surfeit of testosterone?

He has just seen the finished film. For Eastwood, who was already a firm fan of the franchise, it was full of pleasant surprises.

“It’s not super heavy drama,” he says. “It’s Fast and Furious. You grab your popcorn, turn off your brain and have a fun ride. But I was blown away by how fun. After we were finished there was another 70 days of work for the second unit. So this is the first time I can see it with stunts and visual effects. It was magic.”

He sounds genuinely enchanted. Magic? Surely someone who has spent their life in and around the “biz” isn’t so easily impressed?

“Really good movies shine through. It doesn’t matter how much you know about production. You can still be transported.”

Aged 31, the actor retains a particular soft spot for the movies of the 1990s. “There’s something about the dramas they made back then. Unforgiven. Braveheart. Courage Under Fire. Forrest Gump. Shawshank Redemption. A Few Good Men. Those are the films I watched growing up. And I still love them.”

He has been around long enough, he notes, “to tell a good director from a, um, not-so-good director”. Does he have ambitions to follow dad (again) behind the camera?

“Definitely. Film, as everyone says, is a directors’ medium. Albeit a massive collaboration. But – even when they didn’t write it themselves – the director is there crafting and shaping all the way through casting, shooting, post production, marketing. It’s a hugely creative job. And I’ve seen enough to think: How would I do this? I would have done that this way instead.”

For the moment, having bounced from last year’s Suicide Squad and Snowden into Fast 8 and Pacific Rim: Uprising, he has plenty going on. And he reckons he can always go back to valet work: “At least I’d be driving.”

Just not so fast.

He smiles: “Let’s just say that then.”

Seamus Heaney, our dad the poet, by Catherine, Chris and Mick Heaney
6