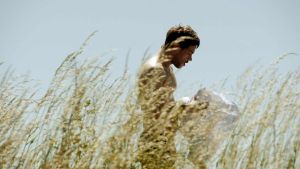 Sauvage makes for a fascinating variation on the tart with a heart trope. Indeed, the miseries heaped upon the nomadic sex worker in Camille Vidal-Naquet’s debut feature can recall the tragic donkey in Robert Bresson’s Au Hasard Balthazar. In common with that beast of burden, the life of Félix Maritaud’s Leo (his name is never used in the movie) unfolds as a series of encounters, some cruel and some kind. He remains open to affection, and there’s a genuine intimacy in an encounter with a much older patron. “I want to spend the night in a boy’s arms; tonight, that boy is you,” he tells the widower.

Leo yearns for closeness, sexually and emotionally, as compensation for lost love. He longs for Ahd (Éric Bernard), a hustler who thinks of his sexuality as a commodity and who has found an older benefactor.

Leo spirals into drug use and develops pneumonia. There were walkouts when the film premiered in Cannes during a now rather infamous butt plug scene, in which two scathing customers treat Leo with contempt and violence. This, alas, is not his lowest moment.

Vidal-Naquet spent years researching Parisian prostitution, and even as the Strasbourg-set film looks to be heading toward Bressonian martyrdom, the handheld vérité ensures that Sauvage is moving, powerful, upsetting, but never gratuitous. Sex can be sadistic and exploitative in Leo’s world. But it’s only ever sex.

Against the clarity and naturalism, there’s something feral and almost fantastic about Leo. He exists entirely outside society. Even among the other hustlers, he cuts a lonely figure. He’s most often found standing apart in the stretch of park where he and others work. “He’s dirty,” as the meaner men he meets note. When a boyfriend offers him a mobile phone, he looks at it, quizzically: “Who would I call?” he asks.

Maritaud, who put in a star-making turn in Robin Campillo’s 120 BPM, is a heartbreaking revelation in the central role. The phrase committed performance doesn’t begin to cover it. He’s so imprinted in every scene, you can’t help but wonder if he hasn’t left something essential of himself in the frame.