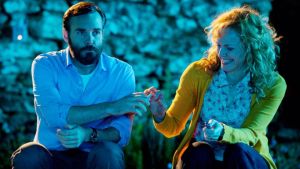 The reliably magnetic Maxine Peake plays Venetia, a woman suddenly propelled into daily tragedy when her husband Connor (Edward MacLiam) suffers a serious stroke. Formerly a carpenter, Connor abandons furniture for the manufacture of perfectly crafted (but useless) spheres. He seems unable to touch his family. While all this is going on, Ted (Will Forte), an American psychologist, records the unfolding misery on camera.

One can imagine Michael Haneke making something rather horrible of this voyeuristic scenario. But Green and Ailbhe Keogan, her co-writer, have other, less extreme intentions. It soon becomes clear that Ted has, in his own way, also withdrawn from the world. He hides behind his camera and his professional distance. Then a change begins to rake place. As events unfold, he becomes ever close to Venetia. They share a joint. They share secrets. Eventually they share a kiss. People may begin to talk.

One might expect Run & Jump to lead inexorably towards violent calamity. But all involved allow a more measured analysis of family dynamics to emerge. Peake combines strength with fragility in equal measure. So good in the recent Nebraska, Forte is perfect as a man constantly testing the ground in front of him for emotional landmines.

Shot largely in Wicklow and Kerry, Run & Jump is, ultimately, a little vague in its dramatic intentions. The film remains, however, an impressive showcase for an array of seasoned talents and emerging masters.

Inferno: harrowing account of postpartum psychosis
9 Miracle warnings and a lack of bull
10