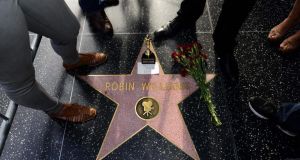 Flowers and a Oscar souvenir is placed on the Hollywood Walk of Fame star for US actor Robin Williams in Hollywood, California, today. Photograph: Michael Nelson/EPA

Oscar-winning actor and comedian Robin Williams was found dead at age 63 on Monday from an apparent suicide at his home in Northern California, authorities said.

Hollywood celebrities and many others who knew him paid tribute to Williams:

US president Barack Obama, in a statement making reference to the actor’s many roles said: “Robin Williams was an airman, a doctor, a genie, a nanny, a president, a professor, a bangarang Peter Pan and everything in between. But he was one of a kind. ... The Obama family offers our condolences to Robin’s family, his friends and everyone who found their voice and their verse thanks to Robin Williams.”

Director Steven Spielberg said in a statement: “Robin was a lightning storm of comic genius and our laughter was the thunder that sustained him. He was a pal, and I can’t believe he’s gone.”

Writer Stephen Fry said: “Devastating news about robinwilliams — knew him a little and liked him a whole lot more. A brain wired like no other and so so kind.”

Actor Danny DeVito, who worked with Williams in ‘Death To Smoochy’, said: “So sad to think about this. Hard to speak. Hard to say. Hard to take.

“All I can think about is what a joy he was to be with. I’m devastated. My heart is broken by this news.”

Actor Forest Whitaker wrote on Facebook: “The world has lost a special soul. Robin Williams touched our hearts, he gave us laughter, he gave us joy, he made us think about the impossible.

“I’m blessed to have been able to walk inside his universe. He forever changed this world with his presence. My thoughts and prayers go out to his family and to all those who hold him dear.”

Comedian Steve Martin said on Twitter: “I could not be more stunned by the loss of Robin Williams, mensch, great talent, acting partner, genuine soul.”

Actor Ben Stiller said on Twitter: “I met him when I was 13 and a huge fan and he was so kind and I watched him be kind to every fan I ever saw him with ... And with other actors he was so generous and brilliant. He made everyone feel special and equal around him even though he was the genius.”

Comedian Chevy Chase said in a statement: “Robin and I were great friends, suffering from the same little-known disease: depression. I never could have expected this ending to his life, and to ours with him. God bless him and God bless us all for his LIFE! I cannot believe this.”

Producer David E. Kelley, who created television show ‘The Crazy Ones’ starring Williams, said in a statement: “The talent was legendary. But equally inspiring, perhaps more so, was his kindness and humanity. Gentle soul who touched us all.”

Officials from Twentieth Century Fox Television, the studio that produced ‘The Crazy Ones,’ said in a statement: “Robin Williams was a comedy giant, and although we only knew him personally for a season, he was warm, funny and a true professional.”

Actor Neil Patrick Harris said on Twitter: “I am stunned and just reeling from the news of Robin Williams’ death. He brought so much joy and heart to millions ... Just, wow.”

Actor John Travolta said in a statement: “I’ve never known a sweeter, brighter, more considerate person than Robin ... Robin’s commitment as an artist to lifting our mood and making us happy is compared to none.”

Actress Sally Field said in a statement: “I feel stunned and so sad about Robin. I’m sad for the world of comedy. And so very sad for his family. And I’m sad for Robin. He always lit up when he was able to make people laugh, and he made them laugh his whole life long ... tirelessly.”

Lucy Mercer, executive artistic director at the Throckmorton Theatre, a small nonprofit center near his home in Marin County, California, where the actor was known to try out new material, said in a statement: “He embodied what it meant to be humble. He doused us in his love and positive glow and never asked for anything in return.”

Actress Minnie Driver said on Twitter: “My Heart’s broken. Robin was a beautiful, kind soul. Can’t bear that he’s gone. So incredibly sorry for his family.”

Comedian Ellen DeGeneres said on Twitter: “I can’t believe the news about Robin Williams. He gave so much to so many people. I’m heartbroken.”

Actor Kevin Spacey said on Twitter: “Robin Williams made the world laugh & think. I will remember & honor that. A great man, artist and friend. I will miss him beyond measure.”

Writer and actress Lena Dunham said on Twitter: “Just shared a moment of silence on the set for Robin Williams, a man who brought so much laughter, joy and healing to so many.”

Comedian Margaret Cho said on Twitter: “I AM BEYOND DEVASTATED.”

Comedian Jimmy Kimmel said on Twitter: “Robin was as sweet a man as he was funny. If you’re sad, please tell someone.”

“What I will always remember about Robin, perhaps even more than his comic genius, extraordinary talent and astounding intellect, was his huge heart — his tremendous kindness, generosity, and compassion as an acting partner, colleague and fellow traveller in a difficult world,” The Birdcage co-star Nathan Lane.

“I am completely and totally devastated. What more can be said?” Mork & Mindy co-star Pam Dawber. “

Comedian and actor Billy Connolly, a close friend of Williams, said: “Robin was both my friend and my hero, a unique talent and a kind and generous man; the world will be a much poorer place without him.”

Comedienne-turned-psychologist Pamela Stephenson Connolly said: “Robin was one of the most uniquely brilliant and complicated comic artists the world has ever known. As a performer, he navigated a dangerous high wire at every single moment - with no safety net.”

The wife of Mr Connolly added: “My husband and I loved and admired him deeply and will miss him in a way that is beyond words.”

“Genie, you’re free,” The Academy of Motion Picture Arts and Sciences tweeted, with a photo of the blue genie — voiced by Williams in the Disney film - embracing Aladdin.

Comedian Rory Bremner said: “Really saddened to hear Robin Williams has died. He was a Catherine wheel of comic energy — brilliant, irrepressible, inspired. A true genius. “His imagination was like electricity — flowed through him, lit him up, sparked wildly, consumed him. He inspired my generation.”