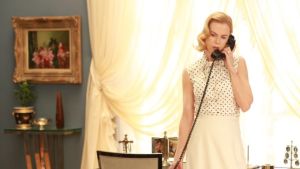 For the first two scenes of Olivier Dahan’s peculiar hagiography of Princess Grace, the director shoots his heroine from the rear. Nicole Kidman manages a serviceable impersonation of the former Grace Kelly in these sequences. The hair may not be quite right, but she’s recognisably human and undeniably female. Then Kidman turns around and begins to speak.

It’s not just that the actor’s current face, a sort of beardless Fu Manchu, doesn’t match with Kelly’s softer, blonder features. She seems to be making no effort whatsoever at the nouveau-patrician Pennsylvanian accent. If the film is to be believed, Her Serene Highness sounded, in private, like chief treasurer of the Sydney Bridge Circle.

One needn’t ask why the programmers at Cannes selected Grace of Monaco as their opening film. Concerning events that took place just down the road in 1962, the picture has already kicked up some controversy. Princess Grace’s surviving family have refused to attend. Harvey Weinstein, the film’s distributor, has allegedly threatened to drop the project following disputes with Dahan – director of the superior La Vie en Rose – over final cut.

Moreover, it can’t be denied that the picture looks absolutely gorgeous. Eric Gautier shoots many of the exteriors with a bold palette that recalls contemporaneous Technicolor and some of the interior intrigue in a sepulchral gloom reminiscent of Gordon Willis’s work on The Godfather. Tim Roth is even less of a ringer for Prince Rainier than Kidman is for Kelly, but memories of his many London hoods – and the fact that he is referred to as “Ray” throughout – brings an amusing estuary thuggishness to the role. There is also some fun to be had in savouring TV-movie takes on Aristotle Onassis (an implausibly slim Robert Lindsay) and Alfred Hitchcock (a plausibly ironic Roger Ashton-Griffiths).

Unfortunately, the film is dragged down by the writers’ decision to focus on an incident in Monaco’s history that will bore many viewers and turn a few more against the supposed heroes. It seems that, in the early 1960s, Charles de Gaulle had the nerve to demand that the prince’s subjects pay income tax to the French government. A blockade developed before, greased by Princess Grace’s charm, the larger nation allowed Monaco – less populous than Waterford – to keep hold of its millions. “Business for the sake of business,” Rainier argues in a speech less inspiring than any by Martin Luther King. Le boo! Le boo!

Still, for all its infelicities, the film does pass one unavoidable test. It is nowhere near as awful as Oliver Hirschbiegel’s recent Diana. Thank heavens for small mercies.