‘Remakes need to be more than what the original was’ 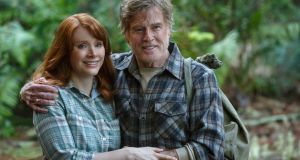 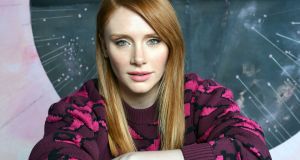 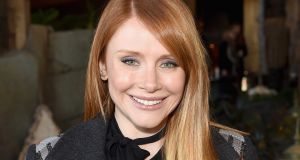 If it wasn’t for her trademark red-hair, the first thing you’d notice about Bryce Dallas Howard is her laugh. It’s not a laugh exactly; more a giggle, and it’s not exactly singular. It’s more fits and peels of giggles, mischievous-sounding and infectious enough to make you think, ha, hey, what am I laughing at?

The daughter of Ron Howard, erstwhile star of Happy Days and Oscar-winning director, ought, one feels, to be a little less personal and a little more Hollywood. She is, after all, part of a heavy-hitting Tinseltown dynasty: her grandfather Rance Howard is still working at 87 and popped up in The X-Files revival earlier this year; her late grandmother was sitcom veteran Jean Speegle; her godfather is Henry Winkler; Bryce and her twin sisters were once babysat by Tom Cruise; one of her earliest memories is trying on the mask from 1985’s Cocoon.

Instead she’s the kind of person who says “Oh my gosh” a lot, and who describes her parents as “the nicest people in the world”.

“It’s interesting because I still get really star-struck,” she says. “You know what I think what it is? We always travelled with my mom and dad when he was working on a movie. We were on the set. But we were always around the process of making a movie. We were on set. We were mostly with the crew. Or at craft services.”

“Actors need to concentrate and very often they’re staying focused and keeping to themselves. Of course there were some great relationships with people who were recognisable. But I never went to premieres and whatnot. We weren’t raised in Los Angeles. ”

She laughs: “Then once I was an adult and I was in my 20s and living in LA, I suddenly thought: Oh my gosh! All these celebrities! It had never really occurred to me that much.”

Instead of schmoozing, the Howard children were discouraged from watching television and trained to be self-sufficient at the family’s Connecticut farm. As the eldest, Bryce was tasked with making oatmeal every morning but all of the kids were schooled in such practical things as doing repairs, or mending a broken roof or toilet.

“And mucking out a goat stall,” she adds. “There was always a lot of goat poop. My family moved to Connecticut when I was four. I was surrounded by woods. It felt really idyllic. I’m almost tearing up thinking about it now. We would spend all day in the woods and come back for dinner. We had a lot of freedom. I was often left to my own imagination. I was kind of a quiet kid. I kept to myself a little bit. I had an imaginary friend: Minky Mildred. Minky Mildred and I would give all these epic speeches to kingdoms of fairies. Living like that really opened me up. It was so defining for me as a child.”

Her outdoorsy upbringing would provide a great foundation for her role as a park ranger in Pete’s Dragon, a lovely folkloric film in which Howard discovers a little boy named Pete and his dragon friend Elliot living wild in the woods. People were surprised to note that Disney’s reboot of the not-entirely-successful 1977 musical had attracted a cast that included Howard and Robert Redford. They were equally intrigued by the involvement of indie hotshot David Lowery (director of Ain’t Them Bodies Saints, editor of Upstream Colour and producer of Listen Up, Philip) and then, downright shocked, when the finished film turned out to be the best family entertainment since Spielberg’s high kidult period.

In an era of expensive do-overs – following on from Ghostbusters, sit tight for remakes of Bladerunner, Ben Hur, Spider-Man and Beverly Hills Cop – Howard completely understands any Pete’s Dragon-related cynicism. She too was sceptical about the entire enterprise.

“When I first read the script it wasn’t because anyone had sent it to me or was offering it to me, I just wanted to see what it was like. I had heard there was going to be a remake of Pete’s Dragon and I thought, Hey! Why do you guys have to remake everything? Then I read the script and it was everything I cared about from the 1977 version and something more. It reminded me of the really classic family adventure films. It was emotional and sincere. I just loved it. I just feel like the relationship between Pete and Elliot is so beautiful. And it’s a very powerful message: you’re not alone in the world. Even if it feels that way. What it means to find a family. I realised it’s not a remake; it’s a reimagining. Of course, that’s the word people always use. But it’s true.”

Howard has served time in franchise-world, having essayed Victoria in The Twilight Saga, Kate Connor in Terminator Salvation and Claire Dearing in Jurassic World. Pete’s Dragon aside, she remains cooler on the movie recycling business.

“I’m someone who can get indignant about remakes. I feel like the remakes and sequels I have liked previously really make their own case. They need to be something more and beyond what the original was. Every time.”

She’ll soon return to the titular monster playground of Jurassic World to reprise her role as an executive turned dino-hunter. The original film – well, the original reboot – sparked controversy last year when Joss Whedon denounced one scene as “70s-era sexist”; others, meanwhile, pondered why the promotional materials favoured Chris Pratt when Bryce Dallas Howard was clearly the lead.

Howard insists she can’t complain: “It was such a wonderful experience. I loved playing a character that had such a significant journey. That’s not nothing in an action film. I think actually – and you can fact check this if you go to the Geena Davis Institute website – only 23 per cent of speaking roles in action films are women. So that was very meaningful for me.”

It’s hard to picture Howard in a glum mood. A careful soul who has never drunk alcohol and who only had one boyfriend before her husband, Seth Gabel, she was more shocked than anyone when she experienced a crippling bout of post-partum depression following the birth of her first child – a son named Theo – in 2007.

“It was absolutely devastating,” she recalls. “It’s not something you get over easily. Once you have you experienced severe or chronic depression it becomes part of your life. It’s tragic that culturally, we don’t have an understanding of depression and how to navigate it. If someone has a physical ailment there tends to be a lot of support or understanding. But if someone is suffering psychologically or emotionally, it’s confusing for everyone around them.

“Something I’ve learned is that a more accurate description is post-partum mood disorder. Mothers become overwhelmingly anxious. I wasn’t lying in my bed all day. I’m freaking out. I’m crying in the bathroom. I’m cleaning obsessively.”

Happily, Howard had a much better experience following the birth of her daughter, Beatrice, in 2012. She remains determined, however, to share her experiences so that others battling post-partum disorders might not feel so alone.

“I had my second child in Vancouver in Canada and in the hospital they had a specialised mental health reproductive unit. They started having sessions with me during pregnancy so they could establish a baseline for where I was at. They had two people – a psychiatrist and a psychologist – so there was always a second opinion and someone who could be there for the mother. I was speaking with them for a year.

“That’s typical in Canada, where, of course, those services are free. And I’m very grateful for that experience. Because if you feel out of it and lost for the first few years of your child’s life, it’s time you never get back. But the more we can talk about post-partum, the more we can learn and help families going through it.”