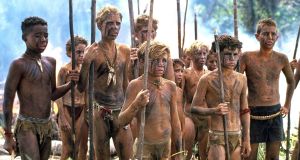 Lord of the Flies: the real-life story is a corrective to the feral vision of William Golding’s bestselling novel and its film

A real-life Lord of the Flies-style shipwreck has sparked a scramble for screen-adaptation rights among film and TV producers.

The writer of an article about it, Rutger Bregman – who is also the author of Humankind: A Hopeful History, from which it is an excerpt – tweeted that he was “getting bombar[d]ed with emails from producers and directors”, while Deadline reported that the sales agent The Agency is fielding “significant film and limited series interest from players in US, UK and beyond” and that “producers are looking into rights to the story but some are also exploring life rights of characters involved”.

Bregman adds that no decision has been made yet. “I can only say that Sione, Mano, Tevita, Luke, (the four survivors of ‘Ata), Peter [Warner] (the captain who rescued them) and me are collaborating and will make a decision together.”

Love this story. Personally, I think you should prioritize Polynesian (Tongan if possible!) filmmakers as to avoid cultural appropriation, misrepresentation, and to keep the Pasifika voice authentic. I'm probably not available lol 😭😔 #Pasifika #OurStories https://t.co/8WHjHCO6wg

Bregman’s article recounted the experiences of six Tongan teenagers who survived for 15 months on the remote, uninhabited island of ‘Ata in 1965, after stealing a fishing boat and attempting to sail to Fiji, about 750km away. Bregman stressed the co-operation and ingenuity of the boys, as a corrective to the feral vision of William Golding’s bestselling novel Lord of the Flies, which was published in 1951.

The interest in the story is not dissimilar to that which followed other recent seemingly miraculous escapes, such as the rescue of 33 miners from Chile’s Copiapó mine in 2010, and the Thai cave rescue in 2018. Similar questions over who is best placed to take the subject on have already sparked debate, with the New Zealand director Taika Waititi tweeting that a Polynesian film-maker should be given the job “to avoid cultural appropriation, misrepresentation, and to keep the Pasifika voice authentic” – while adding “I’m probably not available lol.”

Sione Filipe Totau (aka Mano), one of the original stranded teenagers, says that he is not yet prepared to tell the whole story. “I don’t want anybody to tell my full story until I publish a book from it, maybe make some living for my grandchildren.”

Bregman’s article revealed that the boys were jailed on their return to Tonga (for the theft of the boat) and were released only after their rescuer, the Australian sailor Peter Warner, funded a replacement boat by selling rights to their story to Australian TV. Responding to disquiet that Warner stood to profit from the story rights, Totau said: “If no Mr Warner, we never survive, if no Mr Warner, we won’t be here to tell our story. If Mr Warner makes some money from it, good luck for him, that’s my opinion. I would tell everybody please shut up.” – Guardian