Vitalina Varela: The most unfortunate casualty of cinema closures 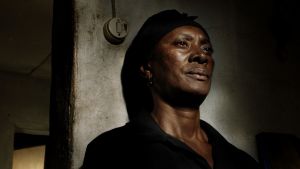 Nobody makes cinema quite like Pedro Costa. Using non-professional actors, illuminated by mere slithers of light, the Portuguese auteur’s films fall somewhere between ethnography and spiritual enquiry. He shoots in African shantytowns on the outskirts of Lisbon, in warrens of tin-roofed huts and makeshift bars.

In Vitalina Varela, the 55-year-old Cape Verdean woman of the title arrives in Lisbon three days after her husband’s funeral. She’s been waiting for her plane ticket since the late 1970s. “There is nothing for you in Portugal,” says a member of the airline cleaning crew, the only person to greet the shoeless Vitalina at the airport. “His house is not yours. Go home.”

Against the material squalor of her late partner’s dwelling, there is her rich, poetic mediation. Against the darkness of Leonardo Simões’ ghostly cinematography, she recalls the sun-drenched house they built together on one of his few return trips to Cape Verde.    She consults the priest, played by Costa regular Ventura, who buried her husband.

Just as Vitalina is left to wrestle with thoughts of the married life she didn’t have, the priest, who has lost faith and congregation, recalls a fatal coach crash. He had earlier refused to baptise the victims. “When you see a woman’s face in the coffin, you can’t imagine her suffering,” Vitalina tells him, her own suffering and sense of loss etched in her face and in every frame.

As ever, Costa shoots his cast with nobility and care. There is no sense of poverty tourism in the way he frames Cova da Moura. It is, rather, a place transformed into an otherworldly space.

Vitalina Varela is not an easy film. It has neither a conventional narrative nor structure. It demands a particular dreamy engagement. Indelible images and sequences – a funeral procession, night gardening, a bloody pillow – punctuate Costa’s hypnotic spell.

The most unfortunate casualty of cinema closures, it’s a film to wash over you.

On Mubi from May 19th

The best new young-adult fiction: The thrills and terrors of piloting
9