Freshly restored in a new print, Akira Kurosawa's epic reimagining of Shakespeare’s King Lear has not dimmed one bit in the three decades since its first release 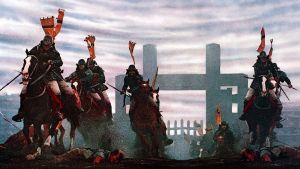 There will be blood: Akira Kurosawa’s epic Ran

In 16th-century Japan, the Great Lord Hidetora Ichimonji, has spilled “an ocean of blood” over more than 50 years to rule over the horizon.

A dream leaves the old man discombobulated: “I was in a strange land, a vast wilderness. I went on and on but met no one.” Thus, he outlines an unlikely retirement plan, one that will divide his kingdom among his three sons: Taro, Jiro, and Saburo. Hidetora, meanwhile, will retain the title of Great Lord.

Saburo, the youngest sibling, immediately scoffs: a warlord cannot retire, nor can his sons hope to live cosily in neighbouring castle-keeps. Tango, Hidetora’s most fervently loyal subject, agrees. Both are banished for their insolence.

Adding to familial friction, is the presence of Lady Kaede (Mieko Harada), cinema’s most formidable succubus, who manipulates one brother, then another. Her seduction technique includes knife-wielding, shrieking, and licking the blood from the puncture wound she has made in your neck.

Against these sexual shenanigans and the vast battle sequences that ensue, Hidetora (Tatsuya Nakadai, the once-dashing young star of The Human Condition trilogy, buried under Noh theatre contouring) cuts an increasingly marginalised, pathetic figure. Yet we are never allowed to forget his historical cruelty: “I burned down your castle. Your mother and father perished. And you smile at me,” he bellows contemptuously at his Buddhist daughter-in-law, Lady Sue.

With Ran, legendary director Akira Kurosawa reimagines Shakespeare’s King Lear against a bloody, feudal backdrop. The differences between the Japanese director’s work and the Bard’s play are not merely superficial transpositions. Saburo is no Cordelia: he is rather brash and, like the film itself, unflinchingly nihilistic.

There are strange cutaways to clouds and Godzilla creator Ishiro Honda is Kurosawa’s assistant and orchestrator of the epic samurai conflicts. In a film characterised by a sense of impending doom, there are hints of atomic doom. The frantic cuts and swashbuckling action that defined Kurasawa’s earlier films have given way to an unsparing, static gods-eye view.

All three of his regular DOPs - Takao Saito, Masaharu Ueda, Asakazu Nakai - worked on Ran, a film he surely intended as his last great cinematic statement. He spent more than ten years on the detailed hand-painted tableaux that would become the film’s storyboards.

A similar level of painstaking undertaking was required at all levels. Costume designer Emi Wada won an Academy Award for her work on Ran; she spend three to four months on every painted silk robe.

One can never be short of things to look at while Kurasawa’s Ran is in the world.