Sightseers co-creator Alice Lowe delivers a dark and messy essay on gestation - and it's an unsettling, satirical gem

Driven by the voice of her unborn child, a pregnant woman takes revenge for the death of her boyfriend, embarking on a killing spree. 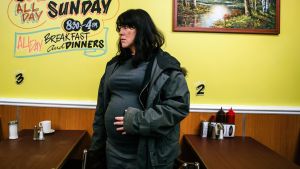 Write what you know: Alice Lowe in “Prevenge”

Here is a film that could only have been made by a woman. It’s not just that a chap wouldn’t (or perhaps shouldn’t) dare to direct a film about a pregnant woman driven to murder by voices from within the womb.

The fact that the invaluable Alice Lowe – co-creator of Sightseers – was actually pregnant during the shoot is part of Prevenge’s singular appeal. Keep your whinges to yourself. This is, among other things, a messy essay on gestation by somebody who knows what she’s talking about.

As the film progresses, we learn that Ruth (Lowe in trademark deadpan mode) is being urged not just towards attacks on general patriarchal intolerance, but also towards a more targeted campaign against those she feels responsible for her widowhood.

Early on, a lascivious DJ, whose chat-up techniques are as unreformed as his taste for 1970s disco, is inconvenienced in the most deliciously savage fashion. Later on, Ruth circles associates of her late husband.

Those two strands don’t quite knit together. A more honed script would surely have stressed one over the other. The film is also a little short on tonal accumulation: we begin in an awful place and end up somewhere equally dreadful.

However, Lowe’s focused performance and her grasp of comic macabre elevate Prevenge to the status of rough-hewn gem. She is equally at home with kitchen-sink satire and – as the images turn red and Toydrum’s synth score throbs – nightmarish nods to Dario Argento.