Pericles the Black: a smudged antihero on the lam 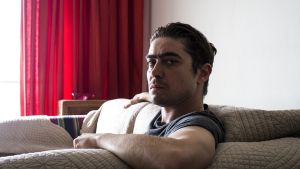 In movie lore it is said that having watched a certain David Lean epic, playwright Noel Coward opined that if Peter O’Toole had been any prettier, they would have had to call the movie Florence of Arabia. It’s impossible not to think of that anecdote while watching Riccardo Scamarcio’s central turn in this arty mobster film.

Director of photography Matteo Cocco favours greys and grit and yet his camera still loves Scamarcio (soon to be seen in John Wick: Chapter Two). The actor’s big soulful eyes and fallen-angel demeanour grant humanity to the monstrous titular character, who introduces himself with the words: “I’m 35 and I bugger people for a living, literally.” A professional rapist in the employ of a Belgian-based Neapolitan crime lord and pizzeria mogul Don Luigi (Morra), Pericles is routinely dispatched to further his employer’s garlic bread empire.

He doesn’t really hurt his victims, he insists; he merely knocks them out and sodomises them. “How many arses today?” a fellow foot-soldier cheerfully inquires. Pericles’ “boy” as he calls it, is available on command – a readiness that allows him to earn extra pocket money from low rent pornographic films. He is, in other respects, ungifted and as thick as the heartiest minestrone.

When he botches a routine “call-out” and ends up on the run, we marvel that it hasn’t happened before. Arriving in Calais – a location now, tragically, denoted by its rows of tents – he meets Anastasia (Fois), a single mother and baker. A smitten Pericles is delighted to play house and hang out with his hostess’s two sons. But, true to genre, his past soon catches up with him.

Abel Ferarra was once attached to adapt and direct Giuseppe Ferrandino’s Neapolitan post-pulp novel Pericle il Nero (Pericles the Black). That film almost certainly would have been a great deal more lurid than Stephano Mordini’s interpretation, as produced by the Dardenne brothers, which downplays dark humour in favour of a neo-realist appearance and the same kind of mobster existentialism that powered along Paolo Sorrentino’s The Consequences of Love.

Sadly, Pericles the Black comes entirely unstuck once the anti-hero goes on the run. The central section offers little more than longueurs and implausibilities. A final showdown is characterised by revelations that don’t seem terribly important.