One Flew Over the Cuckoo’s Nest review: Still raising hell 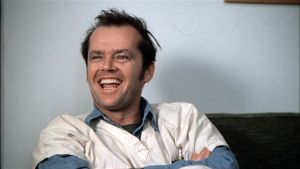 Acting crazy: Jack Nicholson as Randle McMurphy in “One Flew Over the Cuckoo’s Nest”

Film Title: One Flew Over the Cucko's Nest

You just can’t argue with the place which One Flew Over the Cuckoo’s Nest holds in cinema history. In the 42 years since Miloš Forman’s film premiered, it has won every possible accolade, including the big five at the Oscars (Best Picture, Best Actor in a Lead Role, Best Actress in a Lead Role, Best Director and Best Screenplay), preservation at the National Film Registry and a top half ranking on the American Film Institute’s 100 Years . . . 100 Movies list. It also has music by Jack Nitzsche and cinematography by Haskell Wexler. What’s not to like?

It has become an integral part of popular culture: when a robot-nurse with a stark middle parting and starched uniform rolls into an early episode of Futurama, you know she has inventive ways of making you take your medicine.

The actors too would carry something of the film throughout their career. How many times and ways has Christopher Lloyd subsequently been cast as a crazy coot? How many people feared Louise Fletcher’s religious tyrant in Star Trek: Deep Space Nine before she even opened her mouth?

Writing about Jack Nicholson’s roguish protagonist, Vincent Canby’s slightly sniffy contemporaneous review in the New York Times noted: “You gather together at random any 12 men, and one of them will eventually surface as the group’s Randle Patrick McMurphy, the organizer, the spokesman, the leading hell-raiser and free spirit.”

The same might be said of any of the inmates at the Oregon mental hospital where Randle washes up, hoping for an easier stint than he had endured in prison. Will Samson’s Chief is the strong, silent one; William Redfield is the smart, serious one; Brad Dourif is the nervy, stammering one with what proves to be a terminal Oedipus complex.

It’s an odd sensation watching the film four decades on, not least because many of the comparatively unchanged players – Danny DeVito, Lloyd, Nicholson, Fletcher – were actors of an uncertain age playing characters of an uncertain age. It’s odd, too, as one can sense the director reframing McMurphy as a twinkling countercultural force.

In this spirit, the character has no longer raped a nine-year-old as he did in Ken Kesey’s original novel. Instead, he brags about the statutory rape of a teenager.

“But Doc, she was 15 years old, going on 35, Doc, and, uh, she told me she was 18 and she was, uh, very willing, you know what I mean. I practically had to take to sewing my pants shut. But between you and me, she might have been 15, but when you get that little red beaver right up there in front of you, I don’t think it’s crazy at all,” he says chillingly.

Lawrence Hauben and Bo Goldman’s screenplay dampens down the rather pungent misogyny of the source novel, a book etched with such fear of dominant (read employed or opinionated) women, it might easily be rebranded for a new “men’s rights activist” (MRA) generation. One Flew Over the Cuck’s Nest, anyone?

Still, the film can’t quite ditch the suspicion that all women are sluts or emasculating “ball-cutters”, or that Nurse Ratched (despite Fletcher bringing a great deal of nuance to the medic’s passive-aggressiveness) is their scary queen.

The sexual politics have dated, yet conversely, Cuckoo’s overlap with Michel Foucault’s ideas on the construction and socio-political appropriation of madness remains potent and urgent.

A fascinating reissue. Are you ready for your medication?

The Impossible Dream: placing the Steorn story in the context of the Celtic Tiger
7

The best family-friendly films on Netflix
10