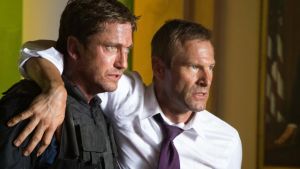 If you’re the kind of chap – and you’d likely be a chap, no offence – who thought that Law Abiding Citizen was a masterpiece and who likes to finish most utterances with “Braw”, then Olympus Has Fallen is the movie for you.

A dumber, louder, live action version of Team America: World Police in which North Korean terrorists (led by martial artist Rick Yune) shoot up the White House and take President Aaron Eckhart hostage, Olympus Has Fallen may, from a distance, seem eerily prescient. Up close it’s nothing more than a relentless shoot- ’em-up (and sometimes knife-’em-up) Die Hard knock-off with various phallic weapons where its brain ought to be. The bad guys have far more in common with the marauding aliens from Independence Day or the undifferentiated commies once hunted by Sylvester Stallone’s Rambo than they do with Kim Jong Un’s best and bravest.

In this spirit, and in keeping with stupidest alien invasion pictures, a great many things are destroyed over the course of the film: the Washington Monument, an American flag, panicky tourists. No one, however, not even the robotic-looking terrorist pilots or nefarious villain Yune, is capable of getting a clear shot at disgraced presidential bodyguard Gerard Butler, the USA’s last and best hope and the movie’s star and producer.

Antoine Fuqua is a dependable action director whose talents will never be maximised while the 1980s continue to be over. Still, even a cine-literate film-maker like Fuqua can’t compensate for Olympus Has Fallen ’s overreliance on cheesy digital effects. There’s so much CG – $130 million’s worth, to be precise – that cognitive dissonance quickly sets in: where are we supposed to look? At this pixel over here or that pixel over there? At the many stars – Speaker of the House Morgan Freeman, foxy bodyguard Angela Bassett, Secretary of Defense Melissa Leo – inhabiting tiny parts? At the “fun” torture of captured enemies?

We’ll give it this: it’s unpretentious and therefore an improvement on Zero Dark Thirty . Can Roland Emmerich’s incoming and similarly plotted White House Down possibly be more idiotic?

Helen Reddy, singer of feminist anthem I Am Woman, dies at 78
7

Indecisiveness led to home of The O’Rahilly being demolished
8