Oliver Hirschbiegel: from Hitler to Princess Diana and back again

The ‘Downfall’ director is back with another incendiary look at Deutsches Reich, this time about one lone oddball who decided to strike back 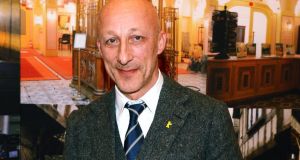 Oliver Hirschbiegel:“When I read the script, I kept thinking of Edward Snowden. He must have that same tyrant-killing impulse inside him as well.” Photograph: Getty Images 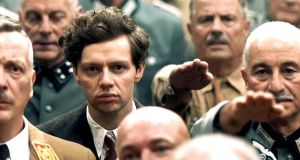 Downfall, Oliver Hirschbiegel’s portrait of an increasingly desperate Hitler in the days before the fall of Berlin, was hailed as a masterpiece upon release in 2004. No film-maker had ever before dared show the Führer snivelling as the Red Army closed in.

Nobody, let alone the meticulous Hirschbiegel, could have foreseen that this same chillingly authentic portrait would become one of the internet’s most durable memes: Hitler reacts to Ben Affleck’s casting as Batman, Hitler reacts to Kanye at Glastonbury, Hitler reacts to Hitler memes. Years later, a community of YouTube users who call themselves “Untergangers”, dedicated Downfall-meme producers, continue to thrive.

“I think I can stop making films now,” says Hirschbiegel laughing, who insists the usage is in keeping with Downfall’s original intent to deconstruct the monster. “This will go on forever. I think the first one popped up about a year after the film was released. It was about something very strange: it was about a new autopilot system. I had no idea what they were talking about. It was very technical. But it was hilarious.

The studio, unhappy with Hirschbiegel’s claustrophobic no-green-screen vérité, drafted in the Wachowskis for rewrites and James McTeigue for reshoots, including a ludicrous twist ending. The final cut – created without Hirschbiegel’s input – was a muddled, near unwatchable catastrophe.

More recently, the director has weathered the storm around Diana, his 2013 account of the princess of Wales’s final two years and her romance with the surgeon Hasnat Khan. Critics everywhere sharpened their quills.

“If you can’t take bad reviews, you’re in the wrong game,” says Hirschbiegel. “That’s part of the deal. ”

Bloodied but unbowed, Hirschbiegel has returned home to make a biopic of Georg Elser. 13 Minutes recounts the anonymous German carpenter’s audacious attempt to kill Hitler and his lieutenants on November 8th, 1939 at the Bürgerbräukeller in Munich. The Führer was there to give his annual speech commemorating the Beer Hall Putsch, but he left the building just before Elser’s elaborate device exploded.

“When I read the script, I kept thinking of Edward Snowden,” says Hirschbiegel. “Snowden must have that same tyrant-killing impulse inside him as well. Something that forces him to do something because nobody else will.”

A 17m steel statue of Elser was unveiled in 2011 in Berlin, but as 13 Minutes suggests, he is not an obvious or particularly likeable hero. Although history has made much of his brief association with the Communist Party, the man, as brilliantly essayed by Christian Friedel, is almost infuriatingly lacking in ideology. Unless we count contrarianism and individualism as doctrinal.

“That’s what always fascinated me about him,” says the director. “He’s like a free spirit. He wants to get out of the small environment that he comes from. He’s a master craftsman, but he has no education at all really. And the ladies like him. He’s not a political person at all. He just has this need for freedom. He doesn’t understand what’s happening around him. It’s unbearable.”

Elser’s home town of Königsbronn adds an interesting texture to 13 Minutes. We’re accustomed to seeing the political skirmishes the Nazis brought to city life. But watching six men drunkenly brawl over ideological differences in a country pub offers a new way of thinking about life under the Reich.

Hitler is briefly glimpsed in 13 Minutes. I wonder if the idea of returning to that figure gave the director pause for thought. After all, what film-maker wants to be “the Hitler guy”?

“I know. Who wants to be that guy? It’s a scary thought. But I wanted to achieve the same level of authenticity that I achieved on Downfall. That was my goal. That was the challenge. To make the audience become part of the experience and get a clean idea of what it tastes like and it smells like to be there.”

“I think I go for fascinating characters. But most of them are that type of character. That’s what I seem to like or connect with. I always had a problem with authority. I’ve always felt uncomfortable when dealing with certain rules and uniforms. So I guess that concerns me, huh?”