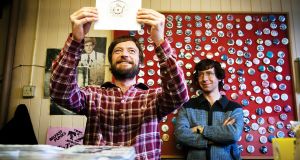 Stars on 45: Richard Dormer and Michael Colgan in Good Vibrations

Richard Dormer ’s time has surely come. The amiable Northern Irish actor and writer, now 43, has been working hard for the last two decades. At the turn of the millennium, he gained attention for his performance as Alex Higgins, erratic snooker star, in his own play Hurricane. Further acclaimed productions followed. A graduate of the Royal Academy of Dramatic Arts, he is, perhaps, an immovable pillar of the Northern theatrical community.

This year, however, Dormer is going global. In April, his first play for the Abbey, Drum Belly, opens on that theatre’s main stage. He will be slashing away at stray limbs as Beric Dondarrion in the next series of the staggeringly successful Game of Thrones. And then there is the sensation that is Good Vibrations. Lisa Barros D'Sa and Glenn Leyburn ’s delirious study of Northern punk is built around Dormer’s warm, eccentric, explosive take on impresario Terri Hooley. The film has already received standing ovations at festivals throughout the planet Who knew the rest of the world so loved The Undertones, Rudi and The Outcasts?

“At the time we knew there was something special about it,” Dormer muses. “Every single person involved felt there was a good vibe. But you never know until you see it. The response has been special -- even in Prague. It seems to have universal appeal. I thought the Belfast jokes would go over people’s heads. But no.”

Terri Hooley, played by Dormer as part naïf, part solipsist, founded Good Vibrations records in the mid- 1970s and went on to nurture the careers of several angular, but melodic, post-punk maestros. Old Northern jerks such as your current writer remember the joy of hearing The Undertones on the John Peel Show. Dormer is just a little too young for that.

“Yeah, that’s right,” he says. “I knew nothing really. Punks were scary guys to me. If you saw them on the street you crossed the road. They were spiky haired ruffians. Having researched the film, I discovered they just had amazing tunes. That period had some of the greatest songs ever written.”

The film is far from a hagiography of Hooley. He comes across as an unstoppable enthusiast, an open-minded musical magpie and a fine teller of tall tales. But he is also seen to be neglectful of his family and irresponsible as regards his clients’ business affairs. Mr Hooley is still with us and has been supportive of Good Vibrations. Did he ever object to the film’s less flattering turns?

“No, not at all,” Dormer says. “On the rare occasions he visited the set he soaked it all up. He really respected the crew. He respected Glen and Lisa, the directors. He accepted that, for drama, you have to have the highs and the lows. He understands that’s him. I think the stuff about his kid really moved him.”

You could draw comparisons between Hooley and Tony Wilson, founder of Factory Records, but that Mancunian operator did manage to create several successful acts and to transform the image of his home city. Of the Northern Irish bands, Only The Undertones and Stiff Little Fingers (never a Good Vibrations act) managed to score serious sales outside their home territories. Rubbing up against the musicians, Dormer must have got some sense if they felt chances had been missed.

“Yeah, I think so,” he says. “The thing about coming from Belfast in that era is that you felt lucky to be alive. To have made some music was a real bonus. But they are just soldering on. There is no resentment I think. Greg Cowan from The Outcasts was shaking coming out of it. It was like time travel.”

You can see why Barros D'Sa and Leyburn settled upon Dormer for their leading man. Possessed of a dark brown voice, fond of stories, Dormer has enough charm to forge his own career in the impresario business. Born in Portadown, raised largely in Lisburn, he has some show-business blood swilling around the veins. His granddad and dad – a psychiatric nurse -- spent some time touring Ireland as a double act named Dusty and Slim.

As is often the case, Dormer ended up in drama class by accident. “It was a rainy day and the class was nearer than home,” he laughs. Dormer delivered a few lines from Sean O’Casey and suddenly discovered he enjoyed the attention that was coming his way.

After attending RADA, he spent eight years working happily in London. Then something he can’t quite explain came over him.

“I was in this show in the West End and I just thought: I can’t do this any more,” he says. “I gave up acting for two years. I was on the dole. I lost direction. I travelled around Ireland for a while. Then I started writing.”

One day on O’Connell Bridge in Dublin he met an old colleague who lured him back to Belfast’s Lyric Theatre. Dormer had, in his words, rediscovered his “passion for acting”. He also met the woman who would become his wife, director Rachel O’Riordan.

Dormer’s production of Hurricane solidified his position. It was a daunting project to tackle. Alex “Hurricane” Higgins has legendary status in Northern Ireland. Some see him as a faintly demonic figure: drunk, stroppy, violent. Many still idolise him. But nobody doubts the stubborn resilience of the Higgins myth.

“It was a huge deal,” Dormer says. “If I did it now and Alex was still alive I’d be terrified. I did it when I was 30 and I had balls of iron. He came in with his lawyers and sat about four feet away. I was doing the opening monologue of him as a broken old man. He was staring at me. It was terrifying. He didn’t blink. Only now can I appreciate it. I must have been scared shitless.”

So how did Higgins react?

“He said: ‘Well, you’re certainly fit, son.’ There was a lot of leaping around in it.”

Dormer offered Higgins a very generous financial deal: 33 per cent of the takings from the tour. He reckons the project helped Higgins pull himself together. Something of a wreck when the production was launched, he was leaping on stage by the end.

“Yeah, he lived vicariously through the play. He was a mercurial figure. But you couldn’t help but like him. He has that charisma. I am currently writing the script for the film version and I am down to play Alex in that. But you never know with these things. Until a few months ago this thing at the Abbey wasn’t going to happen. So you never know.”

“It’s set in 1969 in Brooklyn, during the Apollo 11 moon landing, over eight days,” he says. “It’s about the Irish mafia in New York. I don’t want to call it ‘commercial’, but it should appeal to young and old. It’s a lot of Irish and American guys going: ‘Hey, fuck you!’”

Meanwhile, the new series of Game of Thrones will be spilling out on television. The adaptation of George RR Martin’s fantasy novels – largely shot in Northern Ireland -- has been a phenomenon since the first trailer emerged two years ago. Millions are waiting to see Richard do his stuff.

“I was in this cave in Belfast -- with 50-degree heat,” he laughs. “It’s among the most exciting experiences I have had as an actor. It’s up there with Good Vibrations.”

His voice agitates with enthusiasm.

“Like when Terry is singing at the end of the film, you think: How I am doing this? This is what I was born for.”

1. “Big Time” by Rudi
The first ever single from Good Vibrations Records, Big Time summed up the movement in one small explosion: choppy, chippy, chorusy.

2. “Teenage Kicks” by The Undertones
What more needs to be said? John Peel’s favourite ever single and the tune that launched one of the great power-pop bands.

3. “The Cops are Coming” by The Outcasts
While Nick Cave was still sneaking fags in the bike shed, The Outcasts pioneered the post-punk murder ballad.

4. “Don’t Ring me Up” by Protex
Named for Protex Blue by the Clash – whose gig energised northern punk – the Belfast band kicked several colour of arse.

5. “Alternative Ulster ” by Stiff Little Fingers
One of the few bands to break through “across the water”, SLF started out as a heavy rock band. Their cacophonic second single shows that influence.

6. “Get Over You” by The Undertones.
Or one of a dozen other songs. “Dressed like Thatcher, you must be living in a different world.” Quite so.

7. “War Stories” by The Starjets
Dating back to the Genesis of punk in 1976, the sharply dressed band got to number 51 in the UK chart with this classic slice of guitar pop.

8. “Wild Colonial Boy” by Ruefrex
A brilliant riposte to Noraid – and all the other ill-informed emigrants – whose donations helped prolong the northern violence.

9. “Ya Don’t Do Ya” by The Moondogs
Very much in the post-Spector Ramones school, Ya Don’t Do Ya features the greatest call and response of the era.

10. “Strange Thing by Night” by Victim
The second single from Good Vibrations has gained a kind of mythical status. A pre-Smiths Mike Joyce played in a later version of Victim, you know.