Michael Shannon’s got the Krypton factor

Michael Shannon is one of the most intense actors of his generation, with eye-popping turns in the likes of Bug, Take Shelter and Man of Steel, but in person, he couldn’t be more nonchalant . . . He even has a nice lie down during the interview 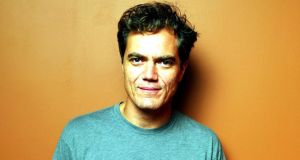 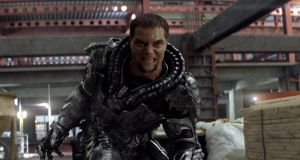 Is it too soon after Take Shelter – our very favourite film of 2011 – to go running back to Michael Shannon for another interview? Hell, no. Around these parts we’re all about Michael Shannon.

Long, long before that Oscar nomination for Revolutionary Road or his incoming turn as Superman’s arch-nemesis in Man of Steel, Michael Shannon was a theatre actor who spent a year on London’s West End, just around the corner from Soho, where we meet today.

Does he still have regular haunts?

“Yeah, sure,” he says. “I get nostalgic when I come back. My favourite thing to do is potter round St James’s Park. I like Hyde Park too. I like the birds. I got my pelican fix this morning. I got a photo for my daughter.”

Shannon has a reputation for intensity and heat but in person he’s chilled and dryly amusing. He’s so chilled, in fact, that he walks into his hotel room and lies down on the couch in front of me – all six feet of him – as if readying himself for a freeform therapy session. Almost everything he says is ultimately punctuated and punctured with a little shrug or nonchalant gesture.

On quitting school to take up the thespian arts, he says: “My father wanted me to go to university in Chicago. They have a very fine theatre school there. I could have gone for free because he was a professor. But I had no interest. I didn’t even finish high school. I knew how to get auditions for plays and that’s what I wanted to do. That’s how I met Tracy Letts who went on to write Bug, and Howard Korder, a head writer on Boardwalk Empire.”

And here comes the shrug: “I don’t want to encourage people to drop out of school, but it’s hard to say that I made the wrong decision.”

On living in Brooklyn’s hipper-than-thou Red Hook district with partner Kate Arrington and their daughter, Sylvia: “The people there all know what I do. It’s not a big deal. Michelle Williams lives there. When she first moved in, she was getting a little bit harassed by the paparazzi. But that eventually goes away. We just had a hurricane and most of the buildings in the neighbourhood were hit. That’s a much bigger deal than somebody being in a movie.”

How does he wrangle all those paranoid states?

“It happens organically without me thinking about it so much. The circumstances are always so different. The sensibility that Werner [Herzog] brings is very different to the sensibility that Jeff [Nichols] brings. That’s when you understand how much a director is responsible for what you do. Even with similar stories they will create a very different vision. The character in My Son My Son is not capable of taking care of himself and lives at home with his mother. Take Shelter’s Curtis is actually very practical. They are very different people.”

Unsurprisingly, Shannon’s General Zod – a fascistic pair of breeches once occupied by Terence Stamp in Superman (1978) and Superman II (1980) – turns out to be the best thing about Man of Steel.

“People keep asking him what he’s been doing while we’ve been on the publicity tour for Mud,” director Jeff Nichols – who worked with Shannon on Take Shelter and Shotgun Stories – told me recently. “And everybody laughs when Michael says ‘Mostly I’ve been thinking about being a General’. But he’s not kidding. He has mostly been thinking about being a General. He’s going through all the duties and responsibilities that come with the job and how that would affect the psyche.”

I wonder how the prospect of the Phantom Zone might have contributed to the analysis. I can’t think of anything scarier in cinema than the image of Zod and his fellow conspirators being cast off into space in the Christopher Reeve films.

“Oh me neither,” nods Shannon. “That was a very disturbing image. That film stuck with me as a kid. It was so terrifying. The big guy and all that stuff. I loved the original franchise. It’s hard to think why we should make another one. The originals were so good. But they are a bit dated. They are of that era. There is nothing dated about Man of Steel. It feels very contemporary. What I can say is that, visually, it would be very powerful. Because of Zach Snyder. He has a very good eye. I have seen bits and pieces of it. It is very unusual. It is very striking. It doesn’t look like any other film.”

The new, very post-Tamara de Lempicka Superman reboot from 300 director Zach Snyder may look like a Great Leap Forward, professionally speaking, for Michael Shannon. Much of his career has been spent with noted theatre outfits such as Steppenwolf and New Lab. Many of his best-loved screen turns have been resolutely indie. He has, nonetheless, been lurking around Hollywood’s bigger, brasher productions for decades.

Is it the case that he does one movie for the rent and another for his craft, I wonder?

“Ideally, you merge those things rather than keeping them separate,” he says. “Because that way you are a lot more satisfied. The summer I made Take Shelter, I also worked on Machine Gun Preacher and Premium Rush. Obviously, not all the films being equally successful. They are three very different movies. But I pursued all of them with a similar attitude. It didn’t change the way I was working. I had a similar approach in each case.”

Shannon’s voice falters between Midwestern drawl and patrician bass. If it’s hard to place so is he. Michael Corbett Shannon was born in Lexington, Kentucky, a campus town on the eastern outskirts of Tornado Alley. The first time he saw the DC comics that inspired Man of Steel was in the trailer where his cousins lived. His parents, on the other hand, are ABC professionals: mother Geraldine is a lawyer; his late father Donald was an accounting professor at DePaul University.

“My parents met in Kentucky,” he explains. “They had me and then they realised they didn’t like one another very much. He moved to Chicago and she stayed in Kentucky. I moved back and forth. I am a country mouse and a city mouse. I had my country experience. Also from an early age, I was going to Chicago, and for me that was a pretty darn big city. I got to see both sides of it.”

Almost a century before the actor would receive rave notices for his tremendous turn in William Friedkin’s criminally overlooked Bug (2006), Shannon’s entomologist grandfather, Raymond Corbett Shannon, discovered the link between malaria and the mosquito.

“We have quite a bit in the Smithsonian archives on him,” says Shannon. “My sister went there when my father died. And we found out that there’s this actually a little island down around Panama that’s called Shannon’s Cove named after him. Because that’s where he was doing his work.”

The surname, he suspects, is a corruption of Shanahan: “I know there’s a river called Shannon but I’ve never seen an insignia. I never knew my grandfather Corbett Shannon. He passed away before I was born. But I’ve seen pictures of him. And he does not look conventionally Irish. He’s got black hair and olive skin. Maybe he’s what they mean when they say black Irish? Is that the term?”

“That must be what I am. But I just don’t have the time for special projects like finding that out for sure.”

I’m not even sure where he finds the time to see the films and TV he’s in.

“I know. I am sad about the fact that I don’t get to see them much any more. It’s a combination of working constantly and having a family. The movie I really liked last year was Amour. That was staggering. It was particularly powerful because I had a grandmother who had a stroke and she lived for 10 years like Emmanuel Riva was in that movie. That wiped me out. And I love watching movies on planes. I just saw Silver Linings Playbook on the way here. Gee. That Jennifer Lawrence is something, huh?”

And he gets into position for a Shannon shrug: “Directors hate it when you tell them you watched their movie on an airplane. But they get plenty of money that way, right?