Review: A dreary, woke subplot sends Maleficent to a hidden kingdom to express herself 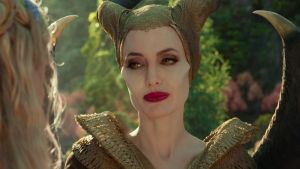 Angelina Jolie is too nice in Maleficent: Mistress of Evil

A punter coming to this sequel with no prior knowledge could reasonably feel offended on the part of its scalpel-cheeked protagonist. She’s not so bad. Most of the time she’s pretty nice. She is only “evil” in the sense that Morticia Addams is evil. “Maleficent: Mistress of the Misunderstood” might cover it.

The filmmakers have been confronted with the dilemma that assails any studio when trying to reset a tension dismantled in earlier films. Robert De Niro and Ben Stiller have to fall out again for the latest Meet the Parents flick. Macaulay Culkin’s parents have to abandon their caring resolve for the next Home Alone romp. Those sorts of things.

By the close of Maleficent, the eponymous fairy – who only Angelina Jolie could have made credible flesh – has more or less sorted out her issues and settled down in sylvan harmony. Princess Aurora (Elle Fanning) is a pal. A lifetime of peace seems guaranteed.

How will Disney tease out her nastiness? This is a problem the studio probably didn’t expect to encounter. A “troubled production” that had undergone reshoots, Maleficent was released with modest expectations, but went on to take an eye-watering $760 million.

In truth, despite that title, the filmmakers have made no great effort to send Maleficent back to the darker side. Someone else is on that job. The gleefully resurgent Michelle Pfeiffer, licking lips as if nearing the front of the queue in Baskin Robbins, arrives as a smoother, more snobbish proxy for the Mistress of “Evil”(?).

An aside. The first Disney Sleeping Beauty – from which these stories sprang – arrived a little more than a decade after Princess Elizabeth married a member of the Greek royal family. Back then, the words “Prince Philip” suggested a dashing sailor with a sharp chin and taste for “modernisation”.

Now we think of an elderly misanthrope crashing his Range Rover into the blameless citizenry of Norfolk. Anyway, they are stuck with the reference and it is a young man of that name (played adequately by Harris Dickinson) who proposes to Aurora at the start of the current film.

The subsequent meeting between guardian and in-laws sets up some properly amusing comedy. Pfeiffer is Queen Ingrid, the Prince’s mum, and she scowls at Maleficent as a Nancy Mitford duchess might scowl if her son threatened to marry a tobacconist’s daughter. Realising that the Gothic visitor cannot touch iron (I dunno), she kindly encourages her to eat with her hands.

This hyper-social comedy is good fun, and both senior actors play it with relish. Pfeiffer has developed a regal hauteur that even Joan Crawford might have admired (another actor who had a much softer image when young). The film’s Maleficent is scarcely more fantastic than the everyday incarnation of Angelina Jolie. Fanning is nothing if not a movie star.

Unfortunately, the movie clatters off into chaos after the first 30 minutes. The three pixies who were such a highlight of the first film (Imelda Staunton, Lesley Manville and Juno Temple) are stuck with back-of-an-envelope dialogue that puts no demands on those fine actors.

Better more of that, mind you, than the dreary, woke subplot that sends Maleficent off to a hidden kingdom — ruled by an embarrassed-looking, wingéd Chiwetel Ejiofor — where her species can express themselves unmolested by human misunderstanding.

There are lessons here about appreciating difference, tolerating foreign beliefs and striving for inter-species harmony. No arguments with that. But those messages are packaged in baffling fantasy baloney that fails to achieve the discipline of your average Care Bear movie.

Still, it may do well enough for those who really, really want to like it.