Long Shot: Not enough jokes in this gender-swapped Pretty Woman

Review: Girl meets loser; girl falls for loser; but the audience is the real loser here 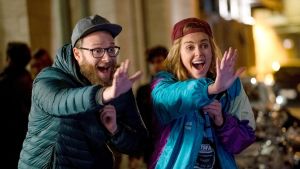 What could have been the hippest comedy of 2008 is a gender-swapped Pretty Woman (yes, an extended dance scene set to Roxette’s It Must Have Been Love) featuring a male journalist in the prostitute role. Insert your own punchline.

Sadly, it isn’t 2008 and the film’s upcycling of the central Knocked Up plank – successful career gal falls for loser stoner – feels dated, despite new upholstering with 2016 election fanfic. Charlotte Field (Theron) is secretary of state to an idiotic celebrity POTUS (played by Bob Odenkirk). She needs his endorsement if she’s going to run for president in 2020, but, as she’s occupying the same joyless role that Katherine Heigl soldiered through in 2007, she also needs better jokes.

Enter Fred Flarsky (Seth Rogen), an unemployed journalist who Charlotte used to babysit for (they once shared a “tender” erection moment), who crashes back into Charlotte’s life face down on the floor (the second such pratfall in the film). She takes him on a round-the-world tour to promote her new environmental initiative. They chat. They bond. And suddenly Alexander Skarsgård’s Trudeau-alike Canadian president has a rival.

Boyz II Men make an appearance, as does Lil Yachty, following a carefully placed reference to the track Broccoli

Boyz II Men make an appearance, as does Lil Yachty, following a carefully placed reference to the track Broccoli. Lamentably, the scene-stealing O’Shea Jackson Jr – playing the hero’s best friend and sounding board – is required to shout “Wakanda Forever!”

The script by Dan Sterling (The Interview) and Liz Hannah (The Post) insists that a woman has to be something more than perfect if she wants to run for office, but that just makes for another fun-guy-meets-prissy-woman set-up. That wouldn’t have mattered if there were enough jokes to justify the indulgent running time. Seth Rogen brings plenty of his trademark indignation but too often he has delivery, timing, and no zinger.