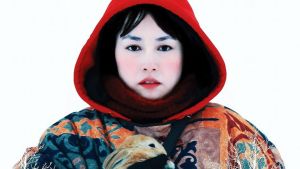 It is to be expected that David and Nathan Zellner, Austin-based film-making brothers of an eccentric stripe, should feel themselves kindred spirits to the Coens. Still, the Minnesotans may be taken aback by the class of homage at play in this lovely, disturbing, thoughtful road movie. It’s hard to think of a film that ties itself so closely to another cinematic text while still retaining such an original tone.

The versatile Rinko Kikuchi plays Kumiko, a lonely woman harassed by the pressures of life in the impersonal maelstrom that is Tokyo. The film begins in puzzling form with her finding a VHS of Fargo in a cave by the ocean. It’s rather as if the Coens’ classic has been handed to her by some benevolent deity.

Anyway, Kumiko soon becomes obsessed with the film and, taking the “based on a true story” caption literally, sets out to track down the hidden suitcase of cash. Interactions with a rabbit (very nice it is too) suggest that, like Alice, we might be on our way into a burrow and on to psychological befuddlement.

Kumiko eventually makes her way to the northern US where, as Fargo promised, she encounters more than a few decent, mildly eccentric, citizens. Yet, even when they try to make a connection, the protagonist’s own emotional barrier and her confusion at the strangeness of America repel all advances.

This is, in more ways than one, a cold film. Directed by David from a script by both brothers, scored by the lovely suppressed noises of The Octopus Project, Kumiko moves at an unhurried pace towards a deliciously uncertain denouement.

It gains depth, however, from the fiercely engaged performance by Kikuchi. Much in the film seems deliberately unreal. But her unshakable sorrow – and possible mental illness – is tangible throughout. A very impressive, singular piece of work.