Kubo and the Two Strings review: another gorgeous, thoughtful gem from Laika 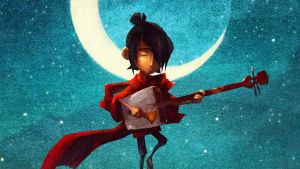 Kubo (voiced by Art Parkinson) in Kubo and the Two Strings

Kubo (voiced by Donegal teenager, Art Parkinson) lives in a remote cave with his ailing mother Sariatu (Charlize Theron). Occasionally, she springs from her depression with tales of the boy’s father, a daring a samurai warrior named Hanzo.

Mostly, she lives in fear that her child will be discovered by her tyrannical father, the Moon King, and her equally wicked sisters; the Moon King has already robbed Kubo of one eye and is desperately seeking the other.

Kubo has inherited his mother’s storytelling prowess and, using a shamisen (a traditional Japanese stringed instrument) and mad origami skills, he regales local villagers with epic tales of derring-do.

He is careful to heed his mother’s advice to return home before dark, lest the Moon king find him, until one evening, when the lure of a Buddhist festival proves too strong for the youngster.

He is soon on the run, with an army of evil spirits in pursuit, on a quest to find his father’s armour with the assistance of no-nonsense Monkey and amnesiac human-insectoid Beetle (McConaughey).

Critic watchers likely know the drill. With every new animation from the wonderful Laika Imprint, there comes a strange raft of anti-intellectual reviews. But these films are too beautiful and thoughtful, for children, goes the shabby argument. We need to keep them good in the wrapper, while the children eat sherbert dips and watch the last Ice Age movie.

Thus, it comes to pass that the gorgeous, philosophical Kubo and the Two Strings, has been semi-dismissed as an improving kid’s film.

History, however, has taught us that while parents have sometimes ignored Laika films as too slick or too scary, their offspring don’t necessarily feel the same way. Coraline emerged from the same studio to decent box office. But it only truly became a family classic in the post-theatrical afterlife, as its reputation grew among teens and pre-teens.

Kubo is not as ‘instantaneously classic’ as that film, but having watched the Laika latest in a cinema populated mostly by kids, we can report surprisingly few lavatory breaks and popcorn excursions among its target demographic.

Sweeping tableaux, a wonderful voice cast and adventure that feels genuinely folkloric make this a film that definitely deserves to be taken out of cellophane. Enjoy.