As a cinematic and political firebrand, Ken Loach has been a force for good for five decades. His new film, ‘Jimmy’s Hall’, tells the story of the first Irishman deported from his own country. But is Loach really ready to hang up his megaphone? “Being realistic, that’s as ambitious as you can be,” says the 77-year-old director 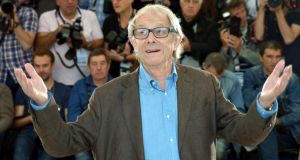 Larkin about: Ken Loach in Cannes. “I’ve been involved in every attempt to gather together a united left. If you can unite all that discontent you would have a big movement” 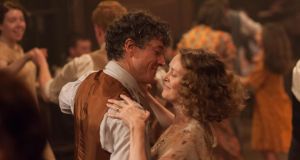 Dancehall sweethearts: Barry Ward and Simone Kirby in ‘Jimmy’s Hall’. “Jimmy and his friends supported people who had been dispossessed, who had lost their homes. And in doing that you challenge the men of property and then you’re in trouble” 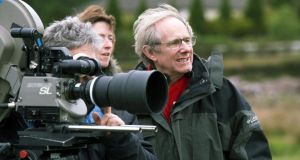 Look left: Ken Loach on set. “If you make the kinds of films we do, it’s not going to be in multiplexes for very long. But you hope it can have a slow-burning effect. And you can support the people who will fight”

The National Front tops the European Parliament vote in France. Golden Dawn win 10 per cent of the same vote in Greece. Lega Nord win 6 per cent in Italy. The Danish People’s Party win 27 per cent. Ukip tops the poll across the Irish Sea.

It has not been a good week for anyone whose politics fall anywhere to the left of Genghis Khan.

A necessary corrective arrives in the form of Jimmy’s Hall, a new film from Ken Loach. The reliably socialist film-maker behind such classics as Kes and Ladybird Ladybird, is, understandably dismayed by the left’s recent failure to woo voters at a time of economic collapse. Dismayed, but not too surprised.

“It’s very hard for the left to get any purchase in the public discourse,” says the 77-year-old. “Because the press reflect the political parties that exist. They convey a narrow spectrum of ideas. They’re all neo-liberals of one stripe or another. All pro-market. All pro-big corporations.”

It does not help, of course, that ‘the left’ is an awfully fragmented place to be.

“It’s totally infuriating,” admits Loach. “I’ve been involved in every attempt to gather together a united left. Right now there’s a movement called Left Unity which is trying to deal with the gap between political representatives who are all neo-liberal and the mass of the people who can see the system collapsing. There are so many campaigns to keep this hospital open or to address cutbacks in funding for the homeless or disabled. But these voices are fragmented. That’s the problem. If you can unite all that discontent you would have a big movement. But public discourse as represented by the press absolutely want to keep the left fragmented.”

But why on earth would the British press – even those outlets that maintain a sheen of soft-core socialist values – so consistently promote Ukip as an up-and-coming political force?

“Ukip is in favour of corporate power. So Ukip is another face of the establishment. They are funded by people who support big corporations. They play on the lowest prejudices and fears. They’re not a fascist party. But they are dangerous. They are using fear and economic collapse in the same way that the National Socialists once did in Germany.”

Jimmy’s Hall opens, rather defiantly in the circumstances, in Irish cinemas today. The film tells the story of Jimmy Gralton, a Leitrim man who immigrated to the United States in 1909. He returned to his native county to fight in the War of Independence, and founded a dance hall, where he and fellow members of the Leitrim Revolutionary Worker’s Group provided free classes in music, boxing and poetry. It’s a small and mostly overlooked story but one with plenty of contemporary resonance for Loach and his regular screenwriter, Paul Laverty.

Ay, there’s the rub. Attendees, as one of the film’s saddest scenes depicts, were soon denounced from local pulpits and the ‘Hall’ came under fire from an alliance drawn from the clergy, Cumann na nGaedheal and local landowners.

Andrew Scott’s depiction of a young, kind-hearted priest – who provides a voice of reason to Jim Norton’s sterner minister – ensures that Jimmy’s Hall is not an anti-Catholic film, per se. Rather, what troubles Loach about the Gralton affair is the unholy marriage of church and state.

“Jimmy and his friends supported people who had been dispossessed, who had lost their homes,” says Loach. “And in doing that you challenge the men of property and then you’re in trouble. And if you establish classes outside the jurisdiction of the church, the church will attack you. The link between organised religion and the landed interests is permanent. It was only a few years later that the Catholic Church was supporting Franco and the Fascists in Spain.”

Although characterised by music and dancing, Jimmy’s Hall picks up where The Wind that Shakes the Barley, his 2009 War of Independence drama left off. That film, the winner of the Palme d’Or in 2006, prompted the Daily Mail to ask: “Why does Ken Loach loathe his country so much?”

“We knew we’d be attacked on that,” smiles Loach. “Because the British ruling class likes to hang on to its narrative about Ireland with absolute venom. The British story is that brave British soldiers were sent to Ireland to stop the Irish from killing each other. And if you say ‘No, hang on’. The British were the violent ones. The British wrecked Ireland and denied the Irish the right to independence which they voted for. If you say that they get very angry. So they got hysterical over The Wind that Shakes the Barley. But that’s good. If they didn’t we wouldn’t have made the film that we wanted to make.”

Loach has long been fascinated by the post-colonial Irish landscape. Hidden Agenda, his 1990 drama depicting collusion between Northern-Irish security forces and paramilitaries, was dismissed by the late Alexander Walker as “IRA propaganda”. The film went on to win the Jury Prize at Cannes.

“The disaster that was partition was never acknowledged,” says the film-maker. “And even now when they’re asking if the IRA or Gerry Adams should be pursued for things that happened during the Troubles, there’s never any suggestion that the British state should be pursued. The biggest loss of life during the Troubles is always written as Omagh. When in fact it was the Dublin and Monaghan bombs. Which was acknowledged by the UVF.

“And there’s strong evidence for collusion with security forces. And this is written out of the story even now. I understand the realpolitik of Michael D Higgins visiting the Queen. I understand people in the Republic who want to adopt this position that times have moved on. We’ve all changed. We can be friends now. But friendship is based on honesty.”

Loach’s words, on paper at least, seem to spell out “firebrand”. But in person, he’s softly spoken and self-deprecating. We shouldn’t be too surprised. Since the 1960s, his representations of the social and economic realities of everyday life have provided some much-needed ballast to contemporary cinema’s flightier tendencies.

His beliefs, in common with his films, are borne from basic human decency not grandstanding ideological tendencies, as evidenced by his poignant depictions of the struggle for labour rights (Bread and Roses, Riff-Raff), state-sanctioned crime (Route Irish) and economic deprivation (Raining Stones, Sweet Sixteen).

In 1966, his TV play, Cathy Come Home, inspired changes in British housing policy and inspired the creation of the homeless charities Shelter and Crisis. Can his cinematic folk songs still make that kind of difference?

“I thinks it’s more difficult. When we did Cathy, half the country saw it because there were only two channels. The medium was new so people were more open to it. Cinema is more fragmented again. Certainly if you make the kinds of films we do, it’s not going to be in multiplexes for very long, But you hope it can have a slow-burning effect. And you can support the people who will fight. Like people working for job security or a decent wage. It can help give them strength. But being realistic, that’s as ambitious as you can be.”

Loach has faced many obstacles over the years, including political censorship. When the Save the Children Fund commissioned him to make a documentary in 1971, they disliked the results so much they attempted to destroy the negative. A documentary series on trade unions during the Thatcher era called Questions of Leadership never aired. It’s hard to believe that someone who has battled throughout his career could be ready to hang up his proverbial megaphone. Can Jimmy’s Hall really be his last film?

“I’m not sure I’ll manage another one on the scale of Jimmy’s Hall. I’m keeping an open mind. You’re away from home for a year. You’re short-changing your family. The days are long. You have to find a lot of emotional energy to keep everyone on the boil. I don’t know if I can climb that mountain again. Maybe something smaller. Maybe another documentary. You don’t have to shoot much. You just have to go into a cutting room. It’s a good job for a senior director.

“And there’s always cricket to watch.”

Jimmy’s Hall is on general release